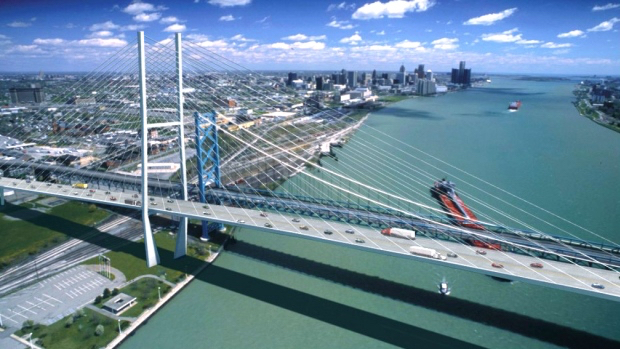 The Canadian government has granted approval to the privately owned Ambassador Bridge connecting Windsor and Detroit to construct a second span, despite its support and funding for the competing Gordie Howe International Bridge.

The Windsor-Detroit Bridge Authority (WDBA) says the Gordie Howe project is on schedule despite some media reports suggesting possible delays.

The Ambassador Bridge’s Moroun family has done everything in its power to prevent or delay the construction of the Gordie Howe bridge — because it would end the private cross-border land transportation monopoly at Canada’s most important trade artery.

The rationale for the Canadian-goverment-backed Gordie Howe International Bridge was that the Windsor-Detroit corridor required more crossing capacity so that trade was not reliant on the existing Ambassador Bridge, The Globe and Mail reports. The Howe bridge requires the Canadian government to spend billions on infrastructure connecting it to both cities.

The Moroun family says it has received approval to build the new six-lane span. “We know there are those who never thought our permit would be approved,” spokesman Mathew Moroun has been quoted as saying.

“The Gordie Howe International Bridge project is separate and distinct from the plans by the Ambassador Bridge owners to replace their existing bridge,” said WDBA spokesperson Heather Grondin.

When completed, the two bridges would offer 12 lanes for two-way travel, compared to the four lanes on the Ambassador Bridge today. (The Morouns plan to close the existing structure but maintain it for emergencies and services).

The question is whether the two bridges could earn enough money through tolls to repay their capital costs in a timely manner. While the Howe bridge will be financed and built by a private contractor, the Canadian government is funding about $4 billion in upfront costs – around $4-billion to construct related infrastructure, such as extension roads approaching the bridge.

“This critical trade corridor needs two viable commercial border crossings to provide sufficient capacity to support the safe and efficient movement of people and goods,” Garneau spokeswoman Delphine Denis said in the Globe and Mail report. “Having both the Gordie Howe International Bridge and a fully functioning Ambassador Bridge will enhance capacity and reliability.”

Cities and towns continue adapting services and planning recovery in a...