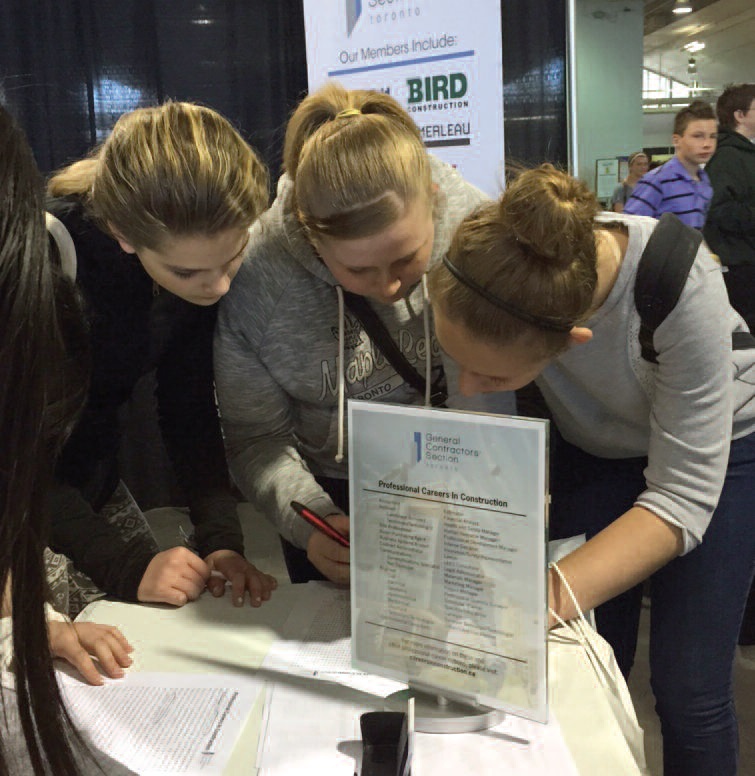 Established in the 1960s, as a separately supervised and funded section of the Toronto Construction Association (TCA), the General Contractors’ Section, Toronto formally became an independent body in January of 2015. This April, the group launched a new website and a new program aimed at supporting students, parents and educators in their access to and knowledge about professional construction trades.

The Section also remains steadfast in its role to advocate for and support unionized general contractors and its relationship with the TCA. The Section has a long history within the TCA, beginning in the 1920s with records of contractors negotiating with Building Trade Unions together, followed by the first full time director of labour relations position being created post WWII. In the 1960s the Section was formally established as a separate organization to “represent the interest of contractors under agreement with one or more of the six civil trades.”

Jim Vlahos, director of labour relations, says from a technical perspective, the Section was formally made independent following the TCA AGM in January 2015. The TCA moved and passed a motion to remove section 5 of its existing constitution which governed the operation of the Section. “Part of this was in response to the Not-For-Profit Corporations Act expected to be proclaimed in the near future and the restrictions placed on not-for-profit structure and governance.”

Another factor was the increasing presence of non-union general contractors in the Toronto area. “The focus of the Section is labour relations for unionized general contractors. Our primary function is to negotiate the GTA and Simcoe County area terms and conditions of certain collective agreements and handle the administration of those agreements in the years between bargaining.”

He says that means assisting with grievances, language interpretation issues and sector or jurisdictional disputes that are heard at the Ontario Labour Relations Board.

The TCA, on the other hand, is primarily focused on commercial issues affecting both union and non-union employers, with a membership that encompasses more than just general contractors. “These issues include things such as contract document reform, legislative issues such as lien reform and other similar issues that are not labour specific.”

“Nonetheless, there’s been no change in the relationship between the Section and TCA. We still share information and ideas where possible and still support each other on initiatives and efforts. We often find our spheres interlinking as some issues touch on both labour relations and commercial/contract matters.”

Vlahos says the Section is currently negotiating the renewal of the Toronto and Simcoe schedules of the collective agreements it administers, and is busy keeping members up to date on the progress of these discussions. “The members’ section of our website provides additional details on these agreements once they are concluded, including updated wage and working conditions and eventually fully downloadable copies of all 25 construction trade agreements as they become available to us.”

The website also includes archives of past agreements as a service to members and provides bulletins on a regular basis to update members on important Labour Board decisions, legislative changes or other issues that may affect unionized contractors.

In launching the new website, Vlahos says the branding of the Section did not change, however the opportunity to launch the new Career Edge program also provided an opportunity to update the site with a more modern look.

The Section’s new Career Edge program is a development intended to advance the knowledge of professional careers in the construction industry for students, parents, schools and educators.

“Career Edge will ensure students, parents, schools and educators have access to tools and experiential learning opportunities that will inform and educate them about professional careers in the industry.”

Tools include classroom activities, construction careers roadmaps and blended learning models (BLMs) to support teachers, as well as a growing bank of volunteer speakers who will be available for specific topics or general presentations. “We just launched the website recently and have already had 22 new volunteer speakers come forward.”

Cimino says with the end of the school year approaching, the summer will be spent recruiting additional volunteers and meeting with school board officials to share program details and career roadmaps. By the fall, Career Edge will be in full flight.

According to Cimino, Career Edge intends to dispel some of the myths and enable the discovery of exciting careers through presentations that are engaging and tools that target specific messages. “We wouldn’t be here without our speakers and volunteers. They are a big part of delivering the message.”

She says speakers will be provided with both training and resources to ensure they are comfortable and that their presentations are top notch and designed to engage students.

Vlahos says the Section has pre-existing bursaries with several colleges to support these careers. “These bursaries, combined with the new Career Edge program, we hope will increase both the quantity and quality of job candidates which is both good for our members and good for the industry.”

He says the Section is excited to be able to launch this new initiative and that the interest the program has already received from students, parents, educators and the industry, makes this an exciting time for everyone.

For more information about the Section, and Career Edge, visit http://gcsection.com or follow the organization on Twitter @gcsection.