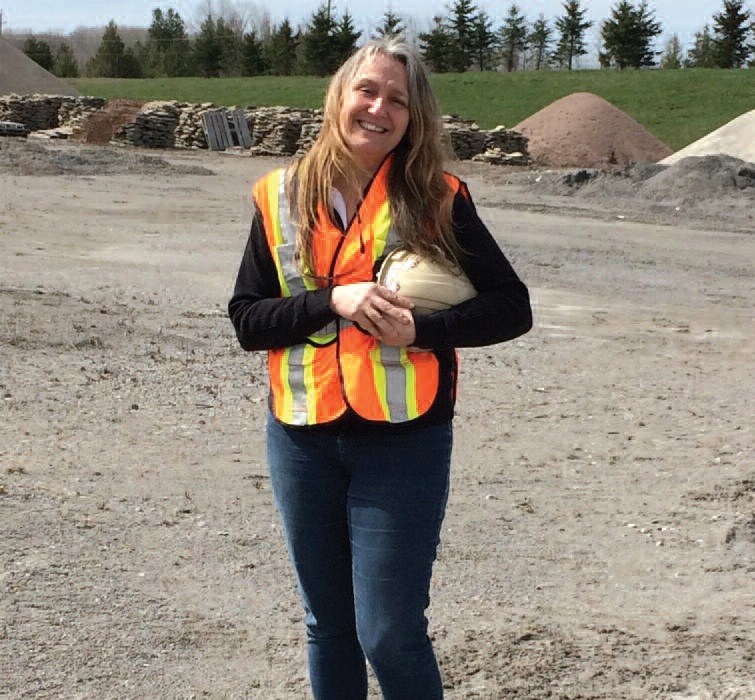 While Cindy McCarthy grew up in a construction family, she never envisioned herself with a career in the industry. Today she is manager, transportation and compliance with Miller Paving Ltd. and director-at-large and past president of the Ontario Sewer and Watermain Construction Association (OSWCA).

McCarthy says her father and his two brothers owned a construction company and quarry so she and her siblings were “born and raised at the quarry site.” Never intending to continue her early experiences in the field, she studied journalism at Ryerson and worked for several community newspapers in Toronto.

Later, after the birth of her children, she found her way back, working first as a dispatcher and then as a field accountant for Standard Aggregates before it was acquired by Lafarge. As the company grew, she began co-ordinating total quality improvement and equipment maintenance programs for various company divisions.

She says in the 1990s, she was passed over for certain roles because of her gender. “The industry has come a long way since then, but it still tends to be a man’s world in construction.”

Today, she says Miller has giver her a “dream job with a dream team.” She says she enjoys the variety of work and independence, where her responsibilities are important to the company’s day to day operations. “And at the end of the day it’s easy to quantify what I’ve accomplished, which I like.”

Although she spends a lot of time in her office, that office is in a quarry where, she says: “I don’t feel like I’m chained to my desk and breathing recycled air all day under fluorescent lighting. I guess born and raised in the industry – it will always feel like home at the quarry.”

She says she enjoys the people in the industry, in part because they tend to be very down to earth, with their feet on ground.

McCarthy says she is in “new territory” in managing the trucking and compliance piece (safety, quality control, environment, community relations) for the company’s Southern Ontario Aggregate Resources Group. “While I’ve been exposed to all of these areas during my career, I’ve not managed them, so there has been a lot to learn in the past year.”

Throughout her career, McCarthy began to be involved with various industry associations, including the Durham Region Heavy Contractors Association and the OSWCA, where she is still involved.

She says the association has a hand in all of the key challenge areas – including safety, the environment, haul roads, legislation – and that its efforts in lobbying, communicating and spearheading solutions are vital. “It’s essential for contractors and suppliers in this industry to support and be involved in their associations. There is much work to do and so much to be gained by being a part of it.”

Construction is still very much a new frontier for women so there are opportunities. “I think, with fewer preconceptions and stereotypes about how we will or should behave in a role.”

Her advice to anyone considering a career in the industry is to pay attention and learn. “Don’t pretend to know what you don’t and ask when you need more information. A person needs to be prepared for some hard work and sometimes long hours, but this is a very tight knit and loyal industry and once you are in, people will look out for you and that can be a rare commodity these days.”