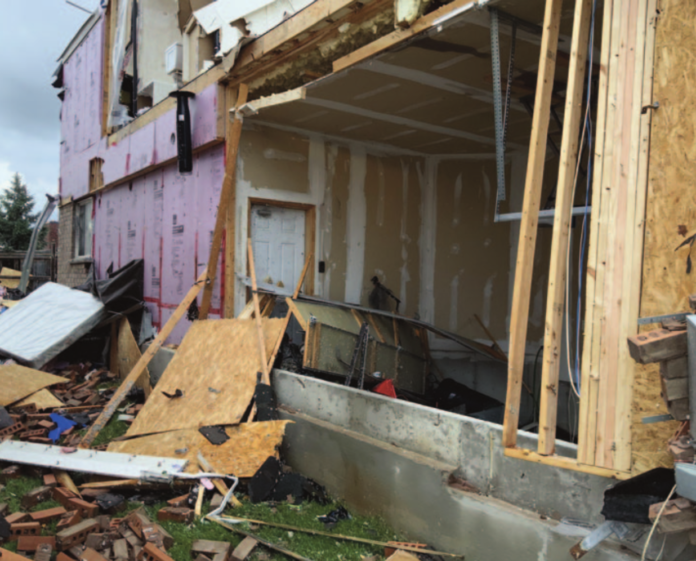 City of Barrie officials say there is an important difference between meeting the Building Code which defines minimum construction requirements and building to be tornado resistant which is a standard much higher than specified in the Building Code.

“It is unreasonable to expect a roof to resist tornado strength winds and resulting forces when they are not required to be designed for that. Some of the winds were strong enough to lift and move the entire weight of a house, so it is not surprising that roofs were removed in their entirety,” the chief building official said in a late July statement. “Also, once a roof is compromised, the effects of the loading it is subjected to becomes even more damaging.”

On average, Canada records more tornadoes annually than any other in the world, except the U.S. – about 60 per year and many go unreported, but the National Building Code of Canada puts little emphasis on requirements to protect against uplift — the types of winds created by tornadoes.

Greg Kopp, professor of civil and environmental engineering, is with Western University’s Northern Tornadoes Project (NTP). After touring the hardest hit neighbourhoods, he said there would have been less damage in Barrie had the building code been followed.

As communities continue to sprawl, Kopp says it makes sense to expect a greater number of twisters impacting neighbourhoods as opposed to farmland and forested areas.

He has been advocating for hurricane straps to be required under Canada’s building codes for years. Also known as hurricane clips, the small metal brackets can help prevent a roof from flying off by securing each truss to the top of a wall. They are effective in up to EF-2 wind loads, which Kopp says includes the vast majority of tornadoes in Canada.

“Hurricane straps would cost less than $200 per house, and it’s a matter of life safety,” he said.

The EF-2 tornado that hit Barrie July 15 reached maximum wind speeds of 210 km/h and left about 60 homes uninhabitable, while also displacing more than 100 people. It was one of five tornadoes in the same strength range that touched down across southern Ontario that day.

Barrie city councillor Natalie Harris, who fled to the basement of a house seconds before the roof was ripped off during the tornado, says she wants building codes updated.

Since experiencing the Barrie tornado firsthand, Harris has been researching whether the damage could have been reduced and, after talking with Kopp, she supports his call for mandatory hurricane straps on new construction.

“I looked up the stairway, and I saw the sky,” she said. “My son, if he was upstairs in his room, I don’t want to even think about what would’ve happened.”

“We saw evidence of missing nails,” Kopp said. “There’s a few places where it looked like there was no nails, or one, where the code requires three. You just have much less strength,” he said. “The building code required those nails to be there.”

City officials, however, disagree and in a statement said a tornado “imposes loads much more severe than those specified in the Building Code.”

“The building industry, including designers, engineers, building officials and code researchers and writers recognize this,” the city wrote in a statement following Kopp’s remarks.

“There are continuous efforts to update and upgrade the Code. This is one area that certainly can use some attention. The work like that being done by the Northern Tornadoes Project researchers will certainly be valuable as the province considers updates to the Code. The city supports sharing these finding with the Province and National Code researchers to facilitate improvements to the Code.”

However, suggestions that the homes in Barrie affected by the tornado did not follow Code casts “a misleading shadow on the excellent work of our registered building professionals as well as the broader building industry.”

Harris will meet with stakeholders and members of provincial parliament this week, and plans to submit a motion to Barrie city council in August asking that the city propose changes to the Ontario building code to add mandatory hurricane straps.

She says the answer is simple: “It could prevent deaths in the future.”

“Governments, builders, insurance companies, researchers and others must work together to strengthen standards for building codes and construction practices to mitigate the expected damage from climate extremes, severe storms and natural disasters.”