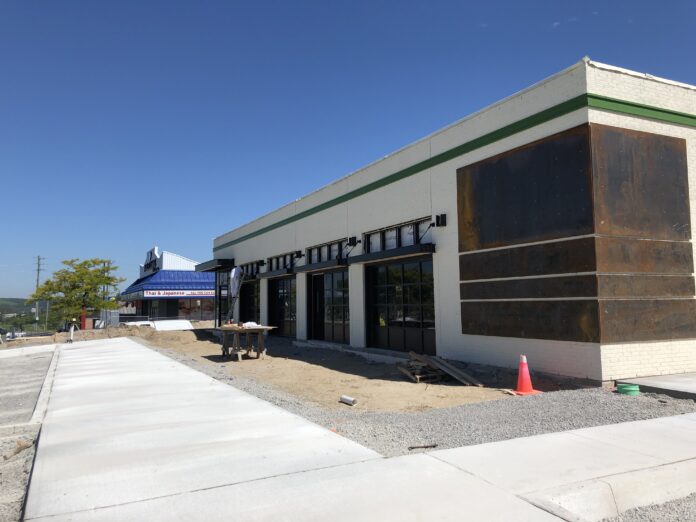 For Bertram Construction, the Beertown project was another welcome chance to work with a long-standing client, Crestview Development Corporation.

“Their goal was to make use of the previously vacant land located on the east side of the Fairview plaza,” said Tyson DeNobrega, Bertram Construction project manager.

“It was originally a three-story office building before it was cleared for the new restaurant.”

Construction began last fall, and Bertram’s role was to construct the shell of this building. The most interesting part of that construction was creating four curtain walls which lead to the large patio overlooking the Highway 400. The Curtain walls are two operational overhead doors and two are static window assemblies.

“It was a new build incorporating industrial elements such and masonry and structural steel to give a very unique feel,” DeNobrega explained. “The use of corten steel as an accent on the southeast corner of the building really drives the industrial feel home.”

Like many construction projects all across Ontario last spring, Beertown’s building schedule was greatly impacted by COVID-19, with the pandemic and mandatory industry closures imposed by Premier Doug Ford for in April shutting the project down for just less than two months. However, the project stayed on budget.

“The project was completely shut down for quite a while and when the work resumed, it was at a reduced pace,” DeNobrega said. “The biggest slowdown was caused by an interruption in the glass and aluminum supply chain.”

One of the building’s aluminum doors was delivered about four months after it was originally scheduled to arrive.

Beertown Barrie at 12 Fairview Rd. is the eighth location in the province.

The building’s modern design fits the unique restaurant concept.Beertown Public House is the leader in the craft beer dining revolution. Established in 2012 and comes from a rich history in hospitality dating back to 1956. The first location opened in Cambridge and has forever changed the landscape of craft beer consumption in the communities it serves.

At the Barrie location, the interior is just over 5,000 square feet and it is expected to open its doors in November.

Bertram Construction has been shaping the landscape of Simcoe County and surrounding area for over 80 years. The firm was founded 1934 by Ross Bertram. In 1954, Ross, along with his brother Pat, and their brother – in – law, Leslie Crook, formed Bertram Brothers Construction.

Noront starts community consultations as it plans for $1 billion Sault....