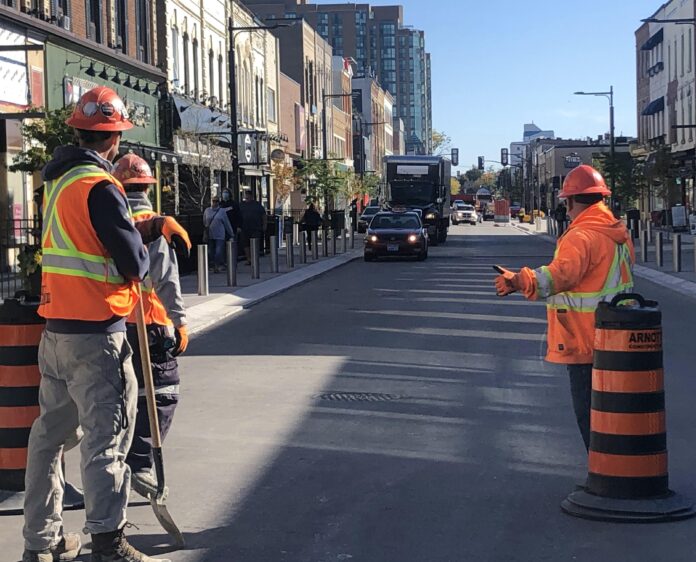 Downtown Barrie has new infrastructure, wider sidewalks and more accessible storefronts, after more than a year of construction. COVID-19 has had a severe impact on Ontario’s economy, with numerous sectors being locked down as the previously unknown virus morphed into a global pandemic. Offices and schools were shuttered, only to gradually reopen in stages throughout the summer.

Ontario is still in the midst of the pandemic, with the predicted second wave rolling in through September and October, and parts of the province facing new restrictions. Some industries were deemed essential, including construction projects, meaning that business continued, but not as usual.

The reworking of Barrie’s main downtown thoroughfare, Dunlop Street, was one such project that proceeded during the lockdown days. Despite COVID-19 measures, the project is expected to come in just a little bit over schedule, and on budget.

“It is still under construction. It was to have been completed by the end of October, but we are anticipating it will be done sometime in November,” said Julia Vanderkuylen, the city’s engineering project manager, infrastructure.

The work began as the summer of 2019 wound down, with an estimated original budget of $10.52 million. However, that number jumped to $13.1 million, with a busy construction season cited as the reason for the increase. The work stretched from Mulcaster Street on Dunlop Street West to Toronto Street on Dunlop Street East (through the downtown core), and was described as necessary to enhance and maintain the corridor as an essential component of downtown revitalization, part of the City’s Downtown Commercial Master Plan.

A class environmental assessment conducted in 2015 looked at ways to enhance the pedestrian environment by considering alternative streetscape configurations, aiming to create more pedestrian space through wider sidewalks on Dunlop, between Toronto and Mulcaster streets. The scope of the project involved:

As surprising as it might seem, the pandemic actually benefited the project’s timelines and planning, as the shutdown of businesses along the corridor allowed for longer stretches of the road to be worked on than originally planned.

”With COVID, we actually changed Downtown Barrie’s major streetscape project was not held back by COVID-19 our plan a little bit. We originally planned to work on certain intersections at certain times, but with COVID we extended the closure areas a little bit, because most of the businesses were closed, and we were able to … progress work a little quicker in those areas than originally planned,” said Vanderkuylen.

“With most of the businesses downtown being closed … we were able to extend the closure to bigger sections rather than breaking it up into smaller sections to limit disruptions to businesses, and most of them were in favour of that. So that was a bit of a positive aspect of COVID (for the completion of the project).

“Before the pandemic hit, work from Mulcaster to Owen streets (the eastern section of Dunlop) had largely been completed, leaving Owen to Toronto streets (to the west) to be completed. Originally, the plan was to do the Owen Street/Dunlop intersection, but “we were able to extend the fencing all the way up to Clapperton Street (in the middle of the corridor) and start work on that area sooner than planned. And then we were also able to add another intersection closure that we didn’t anticipate, and start the section from Maple to Mary streets.”

The project is now in its final stages.

“We are nearing completion now. All the underground work has been done and we are working on the surface works now.”

As with other industries that continued working during the pandemic, measures were in place to ensure the safety of workers and others at the site. Those measures were the responsibility of the contractor, said Vanderkuylen. Measures included questions regarding out-of-country travel, checking a person’s temperature, wearing masks, holding virtual planning and update meetings, and only having onsite meetings when absolutely necessary.

“There was a little bit more work on the contractor’s side to coordinate all those safety measures: making sure there were washrooms, hand sanitizer available, and that sort of thing for people onsite.”

Deeming the construction sector an essential service was the reason this project and others throughout the province were able to continue, added Vanderkuylen. Documentation was given to the contractor explaining why the project was considered essential, in case questions arose as to why people were still working during an otherwise province-wide lockdown.

Major infrastructure projects were considered essential by the Province, and except for COVID-19-related safety protocols, the project proceeded pretty much on pace with not much changing because of the pandemic, said Vanderkuylen.

Lessons learned during the process, she added, included working with impacted business and the public to keep them informed and making sure concerns, like access to businesses when they did open, were resolved.

“We had to stage the project to make sure we weren’t impacting the businesses over too long a period of time … with most construction projects we would typically close the whole section, but we staged as best we could to limit disruptions to businesses. We couldn’t promise there would be no impact, but we wanted to try and improve the look of downtown and the infrastructure at the same time, so there (was going to be) some impact.”

Introducing Mass Timber – The new construction technique that is key...