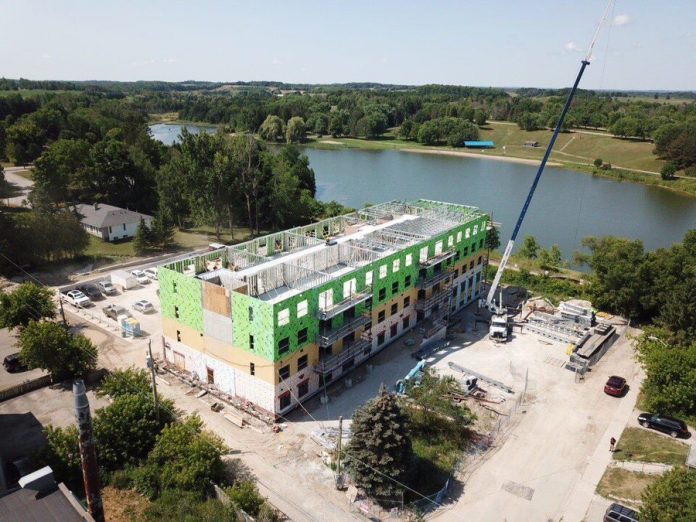 iSPAN Systems LP, a manufacturer of light steel frame building systems for the construction industry, has grown its facility from about 13,500 square feet to 27,000 in the past year.

“We have experienced rapid growth in the last few years and see continued strong demand, which this funding will help us scale up to meet,” said Dwayne Van Harberden, vice-president and general manager of iSPAN.

The expansion – which doubled the size of the facility – received federal funding of $920,000. The company has been at its location on Brentwood Drive in Princeton since 2011 and employs about 60 people.

Founder Mike Strickland created the busines while working as vice-president of research and development for a major steel fabricator. Prior to that he worked as an ironworker and ended up graduating and getting his journeyman papers at the same time.

While working on a connector project for composite floor joists, Strickland was preparing to build a cottage.

“My boss told me that I could use the joists and connecters that I was working on for free, if I wanted to try them on the first floor of the cottage,” he remembers. “There were also some heavy gauge scrap 12 inch C shapes that were offered to me as well, so I decided to frame the second floor and roof with those members.”

The installation experience was frustrating, but provided Strickland with an education about using cold-formed steel for framing.

“I wanted to simplify light steel frame components . . . and I decided to start with flooring systems as it was where I could see making the biggest gains.”

Today, iSPAN’s clients include the City of Guelph, Mattamy Homes and Holiday Inn Express. They recently worked with Bertram Construction on Vista Blue, a new six-storey condominium project in the rural community of New Tecumseth – northwest of Toronto.

Clients agree that iSPAN’s systems are easy to work with. They have competitive pricing as well as good layout co-ordination. The non-combustible wall and floor system create a more complete, cost-effective building system.

“The co-ordination during design, together with its approved systems and non-shrinking construction is favourable to our designs,” Wayne Harrison, VP. Operations | KNYMH Inc. wrote in a testimonial. “Its lightweight construction keeps a more affordable structure below, which is a major saving in condominiums.”

iSPAN delivers just in time direct to the site with less material staging required. Their cambered joist system requires no shoring and does not require specialized trades for installation, which in turn cost less.

Van Harberden said that beyond Canada and the United States, the company is looking into market opportunities in Africa and South America.