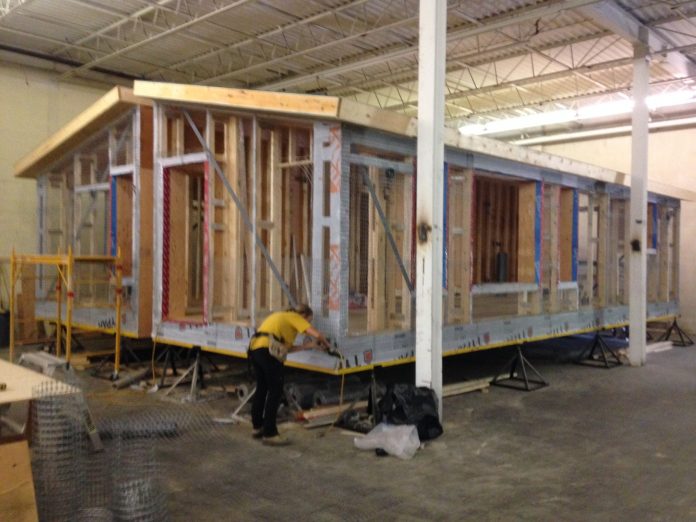 Guelph based Evolve Builders Group Inc. has developed a reputation for changing the home and school landscape one bale at a time through its work producing custom homes and manufacturing modular and portable classrooms from straw bales. The company recently designed, fabricated and delivered the world’s first prefabricated, modular home comprising strawbale walls.

He says the first of a planned line of mobEE customizable modular homes was delivered to its permanent location just north Huntsville in October.

Once the initial design was complete, Polley says the house took 16 weeks to fabricate. During that time a full basement, drilled well and septic system were prepared on site. “Intended as an affordable home, this first mobEE modular house was provided in only a partially finished state inside.”

This, he says, allowed the homeowners to place some of their own sweat equity into the home, an act that further reduced costs while “adding immeasurably to their enjoyment by participating directly in the construction and selection of finishes,” he said.

Evolve will to continue to offer mobEE’s in different states of finish to best match the buyer’s needs.

One of the challenges of this type of construction is that the straw bale walls are heavy because they are typically finished both inside and out with a durable cementitious plaster. “While this aids with robustness – ideal for lifting, transporting and placing a building – it also creates special requirements to ensure that the structure can be self-supporting before it is placed on the foundation.”

Polley says because straw bale walls fall within the Alternative Solutions section of the Ontario Building Code, special consideration for how and who would inspect the building during fabrication had to be determined so that the local building department could satisfactorily assess the partially completed building when it was delivered on-site. “The design and production solutions applied to these considerations are now being baked-in to new designs that are in progress.”

Known for its early work in straw bale homes, Evolve receives dozens of requests each year to build complete custom straw bale homes in areas beyond its ordinary service range. “mobEE modular straw bale homes are transportable across Ontario and beyond, which should help to begin to satisfy this demand.”

He says the additional flexibility in finish options from fully customized floor plans and finishes, to optional pre-selected offerings, to unfinished “white boxes” that allow owners to add their own final touches will satisfy all manners of architectural expectations and budgetary demands.

“Today’s buyers are increasingly attuned to total cost of ownership which accounts not only for mortgage payments but also maintenance, repair, and energy as a better metric for comparing homes than just initial purchase price.”

There is growing interest and knowledge of Passive House and Net-Zero terminology, seeded by early support from the CMHC (Canada Mortgage Housing Corporation) and Canada Green Building Council.  “Internally it has also resulted in our having to reflect on our own typical construction standards as we want to always remain ahead of the industry at large.”

To this end, Polley says three of Evolve’s staff recently completed builder certification training in Passive House construction. Evolve Builders Group will now be among the first Ontario builders capable of delivering to this exacting and outstanding performance standard.   “Many European jurisdictions have already standardized on this super-efficient standard. Ontario’s own building code is intended to reach similar levels by 2030. For our clients, we intend to do so today,” Polley says.

Evolve Builders Group has been recognized several times for its efforts. A modern styled custom straw bale home in Ancaster has been recognized as one of the top 10 stories in (green) architecture for the year. This past December, Evolve captured a bronze award in a national juried competition by Canadian Contractor Magazine as the most Outstanding Renovator and Custom Homebuilder.