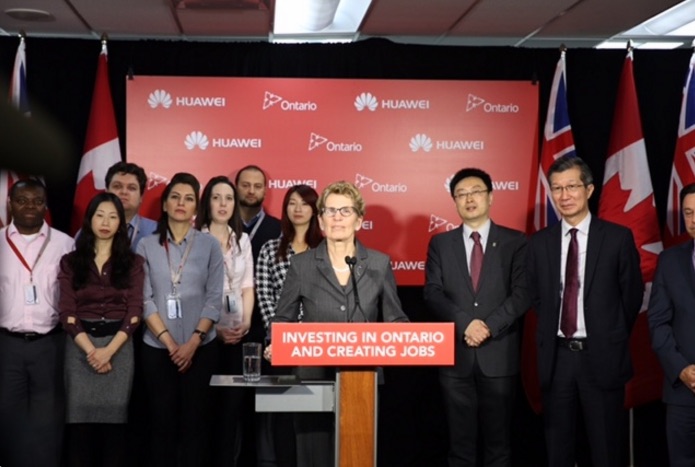 China-headquartered Huawei Canada has announced it will invest $210 million to expand its Ontario operations, as it establishes new research laboratories in Markham and Waterloo and expands its existing research facility in Ottawa, the provincial government announced in a news release.

Premier Kathleen Wynne announced at the company’s Markham headquarters on March 8  that the provincial government  is investing up to $16 million through the Jobs and Prosperity Fund to support Huawei Canada’s 5G Ontario R&D expansion plan. “5G Ontario will focus on advanced communications research initiatives including faster Internet speeds and related technologies such as cloud computing, data analytics and mobile security,” the news release said. Huawei will create 250 new R&D jobs in the province.

This agreement builds on Premier Wynne’s first trade mission to China in 2014, where it was announced in Beijing that Huawei would invest $210 million to expand in Ontario and create 250 highly skilled R&D jobs. The early March announcement supports those 250 new jobs and retains an additional 250 R&D jobs. In total, Huawei intends to invest up to $303 million in 5G and related research initiatives in Ontario over the next five years, $212 million of which is supported by the province’s Jobs and Prosperity Fund investment.