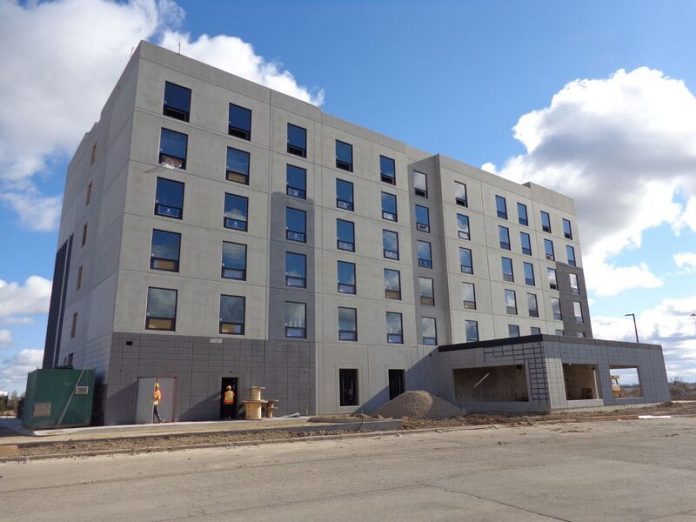 The brand new Home 2 Suites in Brantford will be opening its doors to the public this month.

The six-story, 90-suite project by Hilton Hotels – complete with a number of amenities including a pool area, games room, golf simulator and fitness room – has illustrated an innovative new construction method that is rapidly growing in popularity throughout province.

Stubbe’s Precast was one of the subcontractors that worked on this major project, in tandem with M2 Construction Management and other subcontractors in the surrounding areas. Stubbe’s provided and installed the walls, columns, beams, floors, stairs and landings. Their all-inclusive “total precast” method meant the project was fully completed in record time.

Frans VandenHeuval, the Stubbe’s project manager, says there are many advantages to his team’s “total precast” option. One of those reasons is the ability to reduce the overall construction schedule, with only one single source provider for the structure, and the ability to install the precast all year round.

“By combining architectural and structural precast concrete components, we provide a finished exterior precast that can be quickly closed in for finishing trades to continue on the interior and further expedite the construction project to bring it to substantial completion in less working days,” said VandenHeuval.

Home 2 Suites was completed in 30 days; an impressive feat, but not a surprising one. VandenHeuval explained that all product is fabricated ahead of time, only requiring installation on site by a single supplier.

“With the use of our engineering and 3D modeling we are also able to ensure proper fitment on site and nearly eliminate all site coordination issues,” he said. “Combine this with the ability to work through most weather and our efficient installation crews, we were able to install the superstructure for this six storey hotel in 30 days.”

“Precast components are also assembled with a fire rated design, as its inherent fire resistance eliminates the majority of the fireproofing requirements, only the joints need to be treated,” he said.

In addition to the benefits of using a total precast structure, one of the goals of this project was to eliminate the precast inverted tee beams to create a flush ceiling on the ground floor. On previous projects, the developers have had problems running their mechanical, electrical, plumbing, and/or sprinkler lines around these beams, as there hasn’t always been enough space in the corridors. The Stubbe’s team was able to help solve this issue by using precast “wall beams” to replace the inverted tee beams.

“These second floor walls were then heavily reinforced to transfer the load from the building above to the supporting columns, eliminating the need for the inverted tee beams.”

The precast concrete used in this project offers some environmentally friendly benefits as well. Its energy is energy efficient, recyclable, and reusable, with minimal waste both at the plant and onsite. Meeting environmental standards are key factors in continuing to drive client interested and acceptance.

“This project was an important one for Stubbe’s to provide yet another excellent example of a quality total precast structure that was fully erected in record time,” said VandenHeuval.

“In addition we were able to continue to build on our relationship with a valued client with whom we have completed multiple hotels to date, while continually looking for design improvements and efficiencies.”