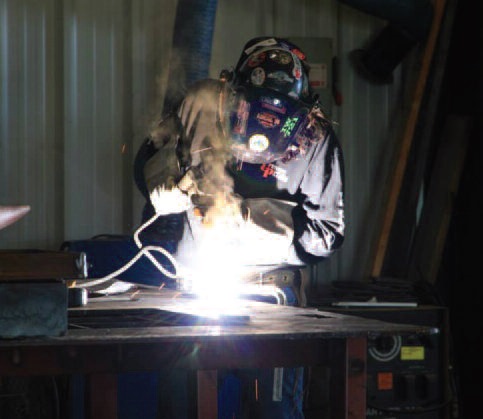 Jamie McMillan is a journeyman ironworker with Local 736 in Hamilton and a boilermaker with Local 146 in Edmonton. She is also founder of Journeyman, It’s a Status, Not a Gender and co-founder of Workplace Equality Awareness Ribbon.

McMillan went to school in the early 90s during what she calls the IT era; a time when skilled trades were not really talked about. She followed her mother’s footsteps into health care as a personal support worker. “I held many unfulfilling jobs for many years before discovering the trades in 2002.”

Since that time she has worked on job sites across the country as an ironworker and welder in steel mills, hydro plants, car plants, mines, gas and oil plants, and most recently as a connector in a mod yard in Alberta. “I worked for a heavy lifting and machinery moving company cribbing and blocking, moving heavy equipment and machinery with gantry cranes and hydraulic jack and slides.”

Growing up in a family who encouraged hard work and everyone chipping in regardless of gender, McMillan says she was prepared for the lack of diversity and inequality that can exist on job sites but felt it was important to blend in and not voice concerns. She says she tried to be as accommodating as possible and worked hard to prove her worth.

Inequality is still very common in construction. However, with more women entering the workforce and proving themselves, “we are slowly breaking down barriers,” she said. “For the most part though we are still all painted with the same brush.”

While some women may have physiological differences requiring mechanical leverage to assist in their work, she says they will also use those few extra minutes to their advantage. “Women are often forced to work smarter, rather than harder, which makes us a great asset to the workplace and jobsite safety. We are often patient, meticulous and detail oriented in ways male counterparts may not be.”

She says while there is more talk about diversity and equality and worksites promote inclusive work cultures, often there is very little support when women experience problems and report them. “There is very little in the way of accountability, disciplinary action or recourse,” McMillan said. “The woman is the one who ultimately ends up laid off or will quit if there are problems and that needs to change.”

The keys to breaking down barriers, she says, rests on education, blind hiring and equality training.

McMillan says she loves her job, the unique skill sets she has acquired over the years and the ability to live a selfsufficient independent lifestyle. She enjoys the variety of something new and adventurous every day. “I love the rush I get when I work at heights or look back and see a structure I am partly responsible for putting in place that will outlive me and many generations to follow. I love how all the trades work together to build the structures and landmarks that decorate our countryside, bridge our waterways and support our towering cities.”

She says it is important for women to understand that construction is more than being on the tools. Tools she says are just a foot in the door and a great way to gain experience when considering the next step or career choice. There are an endless number of pathways and alternatives including safety, quality control, welding inspector, planning, engineering, estimating and more.

McMillan says she originally founded her grassroots program in 2012. She and business partner Pat Williams recently rebranded the organization as KICKASS Careers, added their first sponsor, the International Brotherhood of Boilermakers (IBB), and are working to promote trades careers. “I take spring and fall off to promote careers in construction and other underrepresented occupations, to raise awareness and encourage young women and men to consider the vast opportunities the trades have to offer from the tools to the white hat.”

The organization currently has seven authentic “boots on the ground women in construction in Canada and the U.S. working to engage, educate and offer ongoing encouragement to those considering careers in construction.”

She says understanding that once young people complete school and move on to a career, they will work a third of their lives, and she wants students to find successful and rewarding career paths. “It is important to find something they love to do and find rewarding. The company motto ‘kickass career’ hints at the kickass life the trades can offer.”

Noting that 30 is the new 20, McMillan says if a young woman is seeking a lucrative career that offers incredible wages, a great pension and benefits, skilled trades are worth considering. “Earning while you learn in your apprenticeship you get ahead so by the time you are 30 you can have money in the bank, a paid mortgage, a reliable vehicle and even have opportunities to travel.”