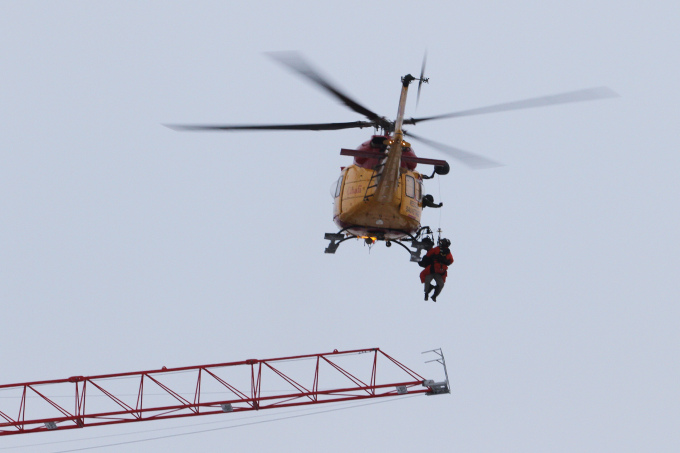 OAKVILLE — Mike Gallagher, business manager of Local 793 of the International Union of Operating Engineers, says the union is grateful to the helicopter team from CFB Trenton that rescued a union member who was trapped on a crane high above a massive fire in Kingston on Wednesday.

“On behalf of Local 793 and our 13,000 members across the province, we are grateful to the search and rescue team from CFB Trenton that rescued our member and no doubt saved his life so he can be with his family this Christmas,” said Gallagher. “The team members responded quickly and should be commended for their actions.

Gallagher said that Sgt. Cory Cisyk, a search and rescue technician who lifted the operator to safety, the helicopter pilot, Capt. David Agnew, and the rest of the crew which included flight engineer, Cpl. Iain Cleaton, Capt. Jean-Benoit Girard-Beauseigle and Master Cpl. Matthew Davidson deserve congratulations for their quick and decisive actions in a very difficult situation

“I believe that the members of the helicopter crew should receive a commendation for their efforts. It might have been a routine rescue for them, but they helped save a member’s life and,it was special to us.

“If it were not for the quick actions of the helicopter crew, this could have been a terrible tragedy.

Gallagher said he is concerned at how quickly the fire spread and, as it was a block of student housing being constructed with wood that burst into flames and started the blaze, the focus should be on the building code and the use of timber as building material for those types of buildings\

“As terrible as this was, imagine the consequences if the building had been completed and students were living inside it when the fire occurred The consequences could have been tragic.”

The 144-unit building was being built by Stelmach Property Management, owned by Patry Inc. Developments.