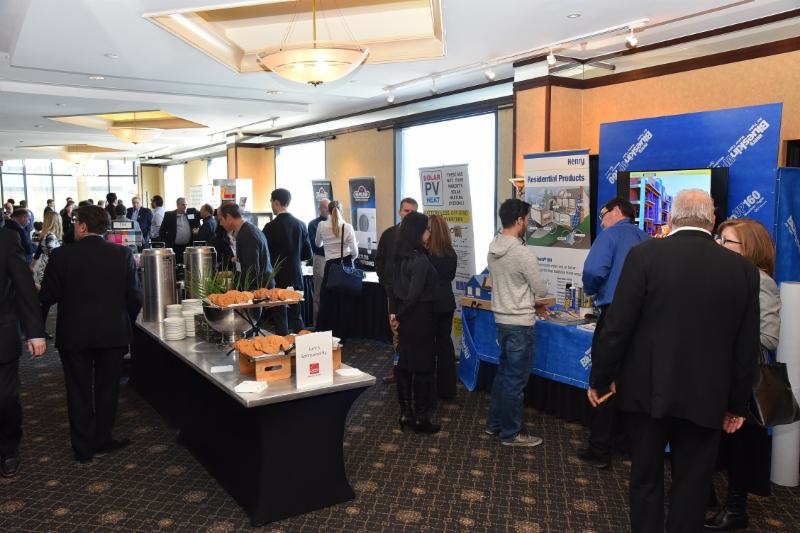 The Minto Group received three major awards at the EnerQuality Awards on on March 13 in Toronto. Among them was Ontario Green Builder of the Year award which recognizes the company for leading the homebuilding industry in energy efficiency and green building this past year.

The Minto Group was also awarded ENERGY STAR® for New Homes Builder of the Year in the large volume category, and Best Green Marketing Campaign in part for their Longbranch community on Toronto’s Lakeshore Boulevard.

The awards recipients were announced at the EQ Awards in Toronto on February 19th. Annually, the ceremony recognizes green innovators and influencers in the building community.

“We are extremely proud to honour The Minto Group and their industry peers for their commitment to building a greener Ontario,” said Corey McBurney, ;resident of EnerQuality, “Year after year Ontario’s residential construction industry finds innovative ways to build increasingly energy efficient homes, and they deserve recognition for their hard work.”

EnerQuality also celebrated the 10th anniversary of ENERGY STAR® for New Homes, a program the organization piloted in 2005. Over the last 10 years EnerQuality has seen a steady increase in market penetration – last year 32 per cent of all Ontario homes were ENERGY STAR qualified, the most successful year to date.  The program is now the most successful green building program in Canada.

Two additional ENERGY STAR® for New Homes Builder of the Year awards were presented, one to Tamarack Homes in the mid volume category, and the other to Midhaven Homes in the small/custom category.

The ENERGY STAR® Champion of the Year award was presented to Al Schmidt of A&J Energy Consultants, who works with builder clients to implement turn-key processes for value added, energy efficient construction.

Peter Gilgan, founder and CEO of Mattamy Homes was inducted into the EnerQuality Hall of Fame. The prestigious award is presented annually to an individual who, over the course of his or her career, has made a lasting impact on energy efficiency and green building in the housing industry. Mattamy Homes has built more than 11,000 ENERGY STAR qualified homes across Ontario, and was one of the first builders to enroll homes in the program.

Brookfield Residential was recognized with Enbridge’s Savings by Design Award for demonstrating building excellence and innovation through their participation in the program.

Sudbury’s Dalron Construction Ltd. was honoured with Union Gas’ Optimum Home Award for their exceptional role in market transformation and leadership in building to a higher performance standard.

EnerQuality’s Leader of the Year award was provided to Shannon Bertuzzi of Enbridge Gas Distribution in recognition of extraordinary advocacy and leadership driving the growth of energy efficiency and green building in Ontario over the past year.

In addition, EnerQuality recognized three Industry Partners whose longstanding collaboration with EnerQuality and their sustained engagement with builders have helped to promote innovation and energy efficiency in the homebuilding industry. Union Gas, Enbridge Gas Distribution and Owens Corning Canada were all recognized, the latter two partners for ten years of support. The Industry Partner Awards were presented by Empire Communities’ Paul Golini, Jr.

The awards show followed the EnerQuality Housing Innovation Forum in which some of the brightest minds in the industry came together to explore the most compelling and ground-breaking products and services in the industry, and to discuss the future of green building in Ontario. The forum included a full day of insightful seminars, networking and education.

The Innovation Gauntlet is a Dragon’s Den-style competition where industry manufacturers and organizations pitched their smartest, most innovative products and services to a panel of judges and the audience, who then chose the winner by ballot. The Gauntlet featured home heating, visualization and renewable technology from a number of solution providers: