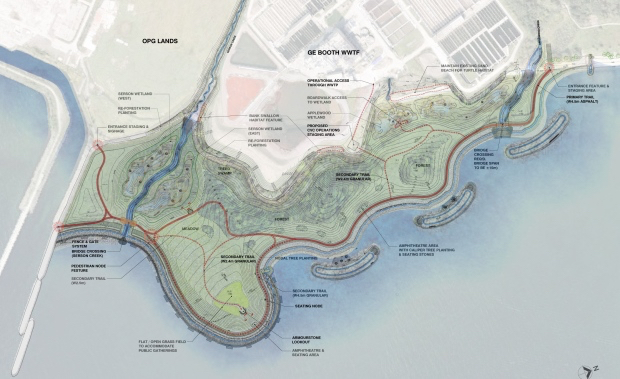 “We are intending to do something much better than Toronto,” Finance Minister Charles Sousa said in a report quoted by the Canadian Broadcasting Corporation. “We want the people of Ontario, the people of Mississauga, the people of Toronto to come to south Mississauga and enjoy the waterfront.”

Sousa says the Mississauga waterfront won’t have several blocking buildings and roads, because of height restrictions and the site design.

Mississauga mayor Bonnie Crombie said the plans are for a “complete community”, with boardwalks, homes, businesses, and cultural and educational spaces.

The development is taking place on the site of the former Lakeview Generating Station. “We’re going to put the lake view back in Lakeview,” Crombie said.

As part of the initiative, Mississauga has started building a 64 acre waterfront greenspace project with landfill from other construction projects, resulting in a hub for wildlife and recreation with a 1.5-km. beach, forests, meadows, wetland, and trails.

The published report says $60 million project will take a decade to complete, with the Region of Peel covering the cots.
Crombie was quoted as saying that when it comes to building a community, this is a “globally unprecedented” opportunity to “do it right.”