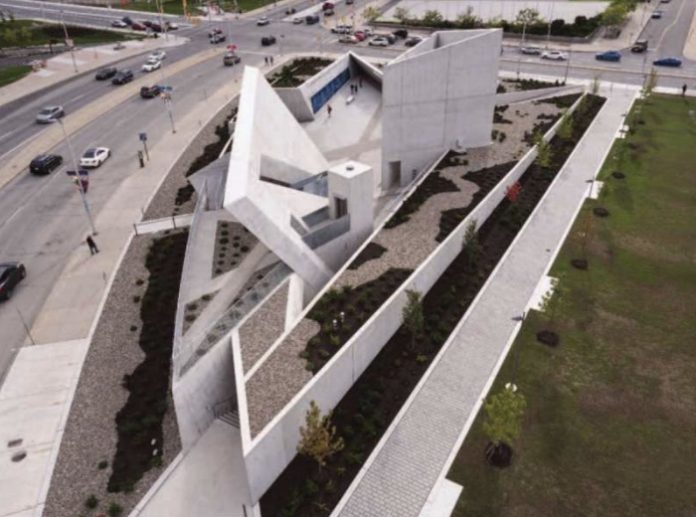 Recognized at The Buildings Show at the Concrete Ontario event, the National Holocaust Monument in Ottawa took top prize in the category of Architectural Hardscape.

A project of the Government of Canada, the monument was designed by Studio Daniel Libeskind, with Claude Cormier + Associés as the landscape architect, and Read Jones Christoffersen Ltd. as the structural engineer. UCC was the general contractor and Harris Rebar supplied and installed the reinforcing steel for the project.

Throughout all phases, including the design competition, design and construction, the NCC worked in close collaboration with the project funders, the National Holocaust Monument Development Council and the Department of Canadian Heritage, who is also responsible for all interpretive elements. The National Capital Commission (NCC) also worked closely with the consulting team that created the design vision, refined the design, prepared all drawings and specifications and provided expert review during the construction, including the architect, landscape architect and photographer Edward Burtynsky.

Its efforts also included providing daily oversite of the construction phase in close collaboration with the general contractor, UCC Group, and integration of the design team.

Described as a “permanent, national symbol that will honour and commemorate the victims of the Holocaust and recognize Canadian survivors”, the monument stands on a .79 acre site, symbolically located across from the Canadian War Museum.

A NCC spokesperson says the momument, entitled Landscape of Loss, Memory and Survival, “serves to honour the victims and survivors of the Holocaust, and ensure that the lessons of the Holocaust, as well as the incredible contribution Holocaust survivors made to Canada, remain within the national consciousness for generations to come.”

Honouring “the millions of innocent men, women and children who were murdered under the Nazi regime and recognize those survivors who were able to eventually make Canada their home”, the architect’s website says the monument “combines architecture, art, landscape and scholarship in ways that create an-ever changing engagement with one of the darkest chapters of human history while conveying a powerful message of humanity’s enduring strength and survival.”

The main challenge, says the NCC, was to design and build a world class monument with a high-degree of artistic and interpretive merit, while respecting the project timelines and finite financial resources as well as long-term operational and maintenance considerations. “Achieving this is the project`s success –ultimately, creating a place where visitors can experience images and facts about the past but leave with a sense of hope for the future.”

The exposed concrete, viewed from above, is made of six triangular volumes to create the points of a star, the symbol Jews were forced to wear to identify them. “The triangular spaces are representative of the badges the Nazi’s and their collaborators used to label homosexuals, Roma-Sinti, Jehovah’s Witnesses and political and religious prisoners for murder.”

A walk through includes a gathering space, 13 plaques and six murals, a small space for quiet reflection and an upper terrace with views to the surrounding city and the Peace Tower, symbolizing hope for the future. “A soaring 14m high triangular contemplation space features a Flame of Remembrance. Surrounding the star is a landscape inspired by the Canadian Boreal Forest –a harsh environment with low-growing coniferous plants and a rocky ground plane that symbolizes the adaptability and resilience of Canadian survivors,” says the NCC.

The National Capital Commission provided the land for the monument and oversaw design and construction. Ongoing, the NCC will be responsible for maintenance, preservation and management, including what its website describes as “close monitoring… to provide security and ensure a respectful experience for visitors.”

Matt Deegan, associate at RJC and lead engineer for the project, says it was a challenge to translate the complex geometry of the monument into structural elements that could be analyzed rationally. “We endeavoured to respect the unique architectural design intent while ultimately creating a structure that was possible to build within the project budget.”

He says that as a structural engineer, it is exciting to work on projects where the structure becomes the focus of the architectural design. “In the case of the National Holocaust monument, the structure is the architecture. It really showcases the complex forms and stark beauty that can be achieved through the use of architecturally exposed concrete.”

Pierre Paquette, sales and estimating manager with Harris Rebar, says his company supplied and installed all of the reinforcing steel for the project, which was challenging in concept and design because of the varied angles, slopes and heights of the walls.

He says that communication and team work were key to the project’s success, which will now draw millions of visitors annually. “We appreciated being involved in such meaningful project such as this and were proud to have been part of creating this unique monument.”

Deegan says that it was an honour to work on such a symbolic and landmark structure, and he is proud of the role his company played in making the monument a reality.

According to the NCC, the National Holocaust Monument commemorates the lives of the millions, mostly Jews, who died during the Holocaust and the resilience of survivors who made Canada their home. “The NCC is honoured to have worked closely with the community of Canadian survivors, the talented design team and many supportive partners to construct this important new place of memory in Canada’s Capital. People will be amazed when they see this new Capital landmark, which will be the largest monument raised in the capital in almost 80 years, when the National War Memorial was inaugurated.”