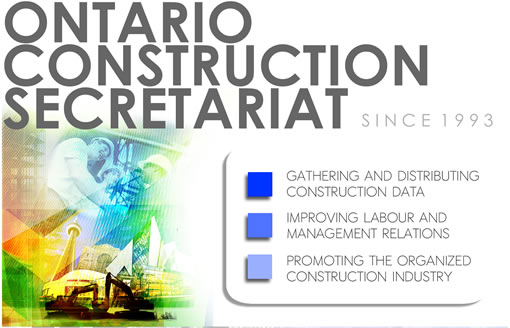 Growth within Ontario’s construction industry – and its correlating job creation – is expected to occur at significantly different rates across the province in 2015, according to the annual Construction Confidence Indicator, released today by the Ontario Construction Secretariat (OCS). This is despite an overall confident outlook for Ontario’s $16 billion ICI construction economy.

Findings from the province-wide survey of contractors, prepared by the OCS and Ipsos Reid, show that the Greater Toronto Area is expected to lead the Industrial, Commercial and Institutional (ICI) construction industry in 2015. This activity is being driven by major public transportation projects and urban infrastructure developments throughout the GTA.

Major infrastructure, manufacturing and public transportation projects are also supporting confidence beyond the GTA. Some of these include a $1 billion retooling at Chrysler in Windsor in preparation for the next generation minivan, a $2.13 billion light rapid transit line under construction in Ottawa, and an $857 million investment by Honda and the Ontario Government to upgrade three plants north of Toronto.

In contrast, contractors in Northern Ontario have a below-average construction outlook. However, mining projects from Vale and Glencore after the survey was conducted may provide cause for greater optimism in the region.

Firms that conduct work in Northern Ontario are the least likely to have a positive view about their business going into 2015, as only 22 per cent expect to conduct more business, compared to 16 per cent who expect to conduct less business this year. This marks the region’s lowest level of optimism since the recession in 2009.

“Low commodity prices explain the low levels of confidence in Northern Ontario as mining companies withhold dollars for new construction,” said Sean Strickland, CEO of the OCS. “To build a strong economy in Ontario, we will need to tap into new opportunities in and outside of mining and infrastructure development in the North. And a critical part of that involves building a skilled workforce that’s capable of meeting future demand across the province.”

The ICI construction sector in Ontario represented $16.1 billion in investment in 2014. Further survey results on the health of Ontario’s construction economy, including labour needs and growth forecasting by region, as well as a look at the state of Ontario’s “underground economy,” can be found here: http://www.iciconstruction.com/resources/ocs2015.cfm

The OCS, a partnership of 25 building trade unions and signatory contractors in the industrial, commercial and institutional sectors, released the survey findings today in conjunction with the 15th Annual State of The Industry & Outlook Conference. The conference brings together industry and government leaders to discuss the future of Ontario’s construction industry, and is free of charge to OCS’s industry stakeholders. Speakers at this year’s event included Ontario Labour Minister, Kevin Flynn; Craig Wright, Vice President and Chief Economist of RBC; Antony Lorius of Deloitte; and Dennis DesRosiers of DesRosiers Automotive Consultants. Sean Strickland, CEO of the OCS, and Katherine Jacobs, OCS Director of Research and Operations, also delivered remarks.

More information about the conference can be found here: http://www.iciconstruction.com/about/ocs_events/2015_economic_conference.cfm

About the Ontario Construction Secretariat (OCS)

OCS was formed in 1993 as a joint labour/management organization representing 25 unionized construction trades and their contractor partners in Ontario’s industrial, commercial and institutional (ICI) construction sector. Its mandate is to enhance Ontario’s ICI construction industry by developing relationships, facilitating dialogue, providing value-added research, disseminating important information to client groups and promoting the value of ICI unionized construction across Ontario and beyond. Visit the OCS online at http://www.iciconstruction.com.