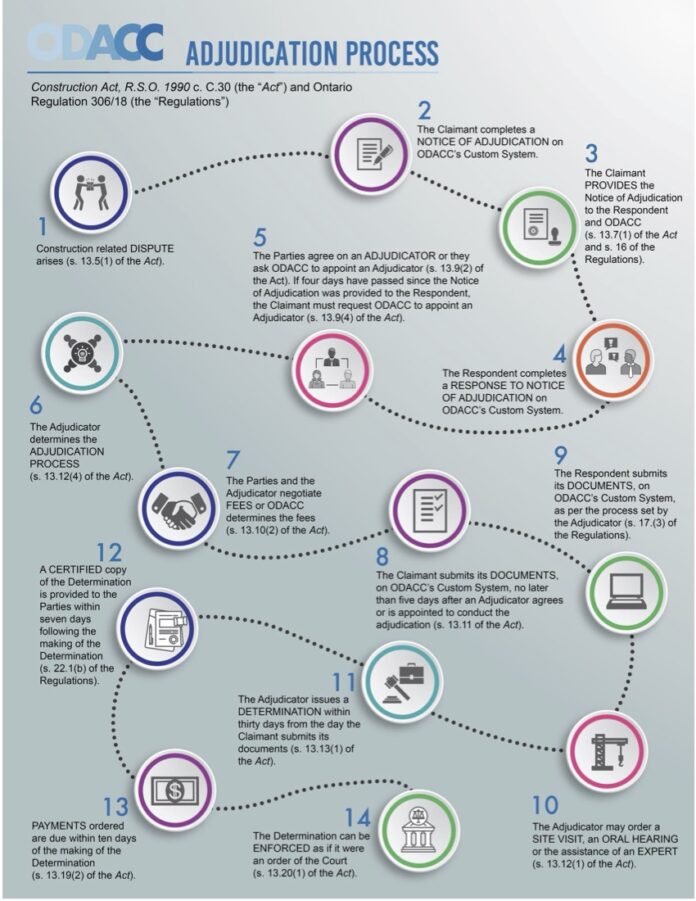 Most of the claims received in the 10 months from when the new rules went into effect on Oct. 1,, 2019 and ODACC’s fiscal year end of July 31, 2020, were for residential projects – but the claims were much larger for the commercial sector.

ODACC said in its report that seven claims were outstanding at the fiscal year end, and 21 claims were terminated. It says in three of the terminations, the claims were paid in full and in 14 “the parties settled the dispute”. An additional three claims related to contracts pre-dating Oct. 1, 2019, and so did not qualify.

ODACC earned a tiny amount of money from its initial adjudications, with $3,975.00 in adjudication and $1,000 in referral fees.

The organization collected most of its revenue from training and qualification examination fees for its roster of adjudicators.

Training fees – initially for in-person training sessions, and then once COVID-19 made these impossible, online programs – reached $314,917.50 and ODACC collected an additional $21,248.67 in qualification examination fees. ODACC says 319 individuals attended the 10 training programs during the fiscal year, starting after the Ministry of the Attorney General named the organization as Ontario Construction Act’s Authorized Nominating Authority on July 18, 2019.

Overall, ODACC certified 65 adjudicators from throughout the province of the 85 who applied for certification.

Adjudicators represent a diversity of professions including: Engineers (28 adjudicators), project managers (26), lawyers (22), quantity surveyors (10), arbitrators (9) and architects (2). There also was one adjudicator who is also an accountant. (Some adjudicators have more than one profession.)

ODACC says most of the adjudicators are willing to work for the system’s lowest flat rate fee –at $800 for small disputes.

“During its first fiscal year, ODACC developed its website (www.odacc.ca) and a state-of-the-art computer system,” project manager Carina Reider wrote in the annual report. “It also developed the training program for adjudicators in conjunction with the Stitt Feld Handy group and has now certified over 60 adjudicators.”

“Many of the course attendees applied to become adjudicators and others are planning to do so in the future,” they wrote. “Others were learning about the system in preparation for becoming parties or representing parties in adjudications. The course attendees’ backgrounds, level of expertise and range of perspectives helped to produce informative discussions and debates.”

“Many of the course attendees have been advocating and waiting fo the introduction of prompt payment and adjudication legislation,” Whitmore and Stitt wrote. “Their enthusiasm and commitment to ensuring that the Ontario construction industry continues to grow and thrive was evident throughout the training.”