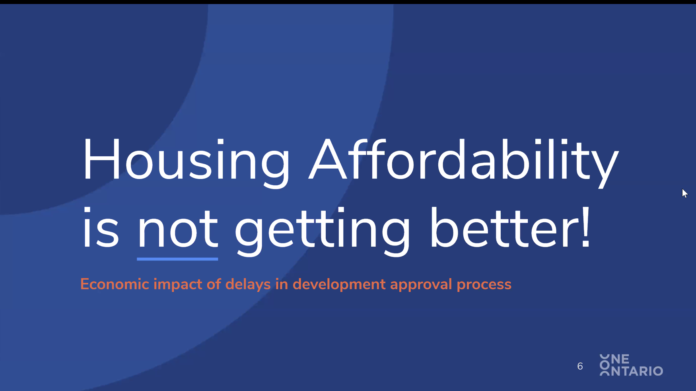 The challenge of achieving affordable housing and making homes available to the “missing middle” of workers who can no longer live in the communities where they work can be solved, in part, by increased collaboration and reduced regulatory inefficiency, say panelists at an online discussion about post-pandemic housing supply and affordability.

Speakers at the June 22 program co-ordinated by OneOntario suggested one of the most effective solutions to the problem will be a speedier, integrated buildings approval process – something that that the digital building systems lobbying group is working to achieve.

Panelist Mauro Ritacca, senior manager of government relations at the Toronto Regional Real Estate Board (TRREB), outlined the challenge with statistics showing the GTA’s housing prices have escalated by 28 per cent year-over-year to May 2021.

But the problem is even more serious for detached homes, which appreciated by 37 per cent in the Toronto region, and in the overall 905 area code, by more than 40 per cent. (The price increases in part reflected pandemic-related searches for space – condos and more dense housing in downtown Toronto appreciated by a relatively lower rate of 9 per cent.)

Arash Shahi, co-founder and CEO of AECO Innovation Lab and the event’s moderator, observed that 22 per cent of the cost of housing is associated with delays on the permitting side, and Canada currently ranks 64 out of 190 countries “when it comes to dealing with construction permits.”

Improvements of just six months in the permitting and approvals process would result in thousands of new jobs and save an incredible amount of money, he said.

As well, Canada is the only G-20 nation without a national Building Information Modelling (BIM) standard, he said.

Speakers addressed the problem of the “missing middle”, one saying that: “I think in cities, you know, our cities function better when we have mixed-income communities and we have a variety of housing types and people are able to live closer to home, live closer to work.”

Nick Gefucia, vice-president, affordable housing at EllisDon Capital, says it takes between three and five years for development approvals in Ontario. “There’s a ton of pushback anytime a government tries to bring housing to market faster.”

The lack of “elasticity of supply and demand” for housing is a real problem – meaning that perceived demand-side issues, such as presumed inflationary pressures from foreign buyers – are relatively insignificant. (Ritacca said that TRREB said that “foreign buyers were less than five per cent of the market, so it’s not really driving the affordability challenge.”)

Gefucia says EllisDon has spent $200,000 to create a base design for affordable housing. “This is not an off-the-shelf type of thing,” he said. “There’s malleability and flexibility for the design, but we’ve done it because we understand what are the CMHC requirements for co-investment.”

The base design covers about 60 per cent of the project process. “It’s something that is transferrable,” he said. “It’s scalable, it’s replicable.”

Mary Ellen Bench, senior advisor at StrategyCorp and Counsel at Dentons, says the problems with siloed municipal approvals systems are challenging because of the number of municipalities and public review authorities (such as conservation districts and utilities) that must weigh in on development and permitting applications.

Problems are growing increasingly severe because of municipal staff shortages, she said. “It s hard to get and retain really good staff. Staff are able to move to better positions and other municipalities so they leave as soon as they’ve got enough knowledge.”

Many of Ontario’s 444 municipalities lack resources including high speed Internet connections and even laptops for staff – so things have ground to a halt during the pandemic in many communities, she indicated.

Some solutions at the municipal level include triaging systems to move applications through an expedited process – but this only works for the largest projects. For the regular work, “it’s a lot like trying to keep dry when you’re standing under a waterfall, and all you have is an umbrellas, because the resources just aren’t there,” she said.

Paul De Beradis, director of building science and innovation for the Residential Construction Council of Ontario (RESCON) noted that Ontario’s development fees and permitting costs are exceptionally high, representing upwards of 20 to 25 per cent of the cost of new housing.

“We’re essentially double that of US cities, and we’re about 30 to 40 per cent more than other provinces,” he said.

Accordingly, conditions could improve with a “reduction in fees for the production of affordable housing” and “facilitation of the process so that it’s either faster or more efficient” to speed up the process, said Pino Di Mascio, head of impact strategy and delivery at Dream. He said Toronto has achieved some success by making more public land available for affordable housing, “and that will help especially if it then gets aligned with these other initiatives.”

The solution to the “missing middle” may be in developing concepts such as the “15 minute city” or “walkable cities” — and making sure there are “a range of housing opportunities” within these communities.

Economies of scale are challenging for missing middle projects, because the approvals processes are not much different for a 55 story tower and eight story building, RESCON’s De Beradis said. Streamlined development approval and permitting processes may be especially helpful to overcome this challenge, he said.

John Stephenson elected as president of Ontario Association of Architects