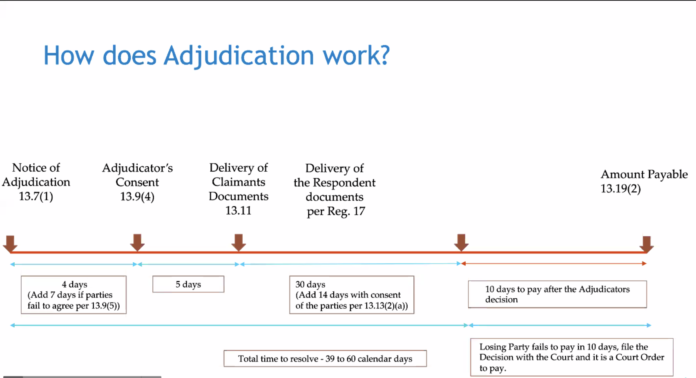 The adjudication system under the new Ontario Construction Act is starting to gain traction, as contractors and subtrades discover how to apply its powerful prompt payment enforcement tool.

Since the adjudication provisions went into effect on Oct. 1, 2019, 72 adjudications have been initiated through the Ontario Dispute Adjudication for Construction Contracts (ODACC), the Authorized Nominating Authority that administers and oversees the process, said ODACC project manager Elise Teitler.

She was speaking at a ZOOM meeting hosted by the Ontario General Contractors’ Association (OGCA) in June with Matt Ainley, a construction consultant and one of 66 adjudicators on ODACC’s roster.

“Prompt payment and adjudication go together like the Yin and the Yang,” Ainley said. “Under the new Act, the owner has 28 days to pay the invoices of the general contractor or the main prime contractor. And from there, it’s just a cascading seven days, as you go down, so you know, if there’s a dispute” you can set the adjudication system in motion quickly.

Under the Construction Act, these kinds of contract disputes can be adjudicated:

Approximately 12 adjudications have been commenced since March, 2021.

She said most adjudications are conducted entirely online – there have been only two situations where adjudicators decided that site visits were necessary.

The parties to the adjudication can select their own adjudicator (from the ODACC-certified roster), or ODACC will assign one. If the parties cannot agree on the adjudicator’s fee, ODACC will set it following a published schedule of fees, which can be found on the ODACC website, based on the dispute’s dollar value.

The fees range from a flat fee of $800 ($400 per party) for disputes valued at less than $10,000 to an hourly rate of $750 for the adjudicator for disputes greater than $1 million. Most of the time, the parties agree on the fee, said Teitler. Ainley noted that the published fees – and the fact that ODACC will set them if the parties don’t agree – effectively sets limits on costs, but the parties are free to agree on fees based on the size and type of dispute to be adjudicated.

There are also specific rules about the number of pages of text to outline the claim – the goal is not to bog things down in paperwork, since under the rules, the adjudicator must get started within at most 11 days, and must render his or her decision within 30 days, unless the parties agree to an extension.

“The vast majority of adjudications do not involve an oral hearing,” he said. “They’re based on fact presented in documents.”

After the adjudicator issues the determination, if the losing party fails to pay in 10 days, the party owed the money can file the adjudicator’s determination with the Court, and it then takes on the status of a Court Order. A contractor or subcontractor, if still unpaid, can leave the job site and charge interest and demobilization fees, as well as remobilization costs once back on the job, Ainley said. And the business owned money still can seek other remedies, such as claiming lien rights. 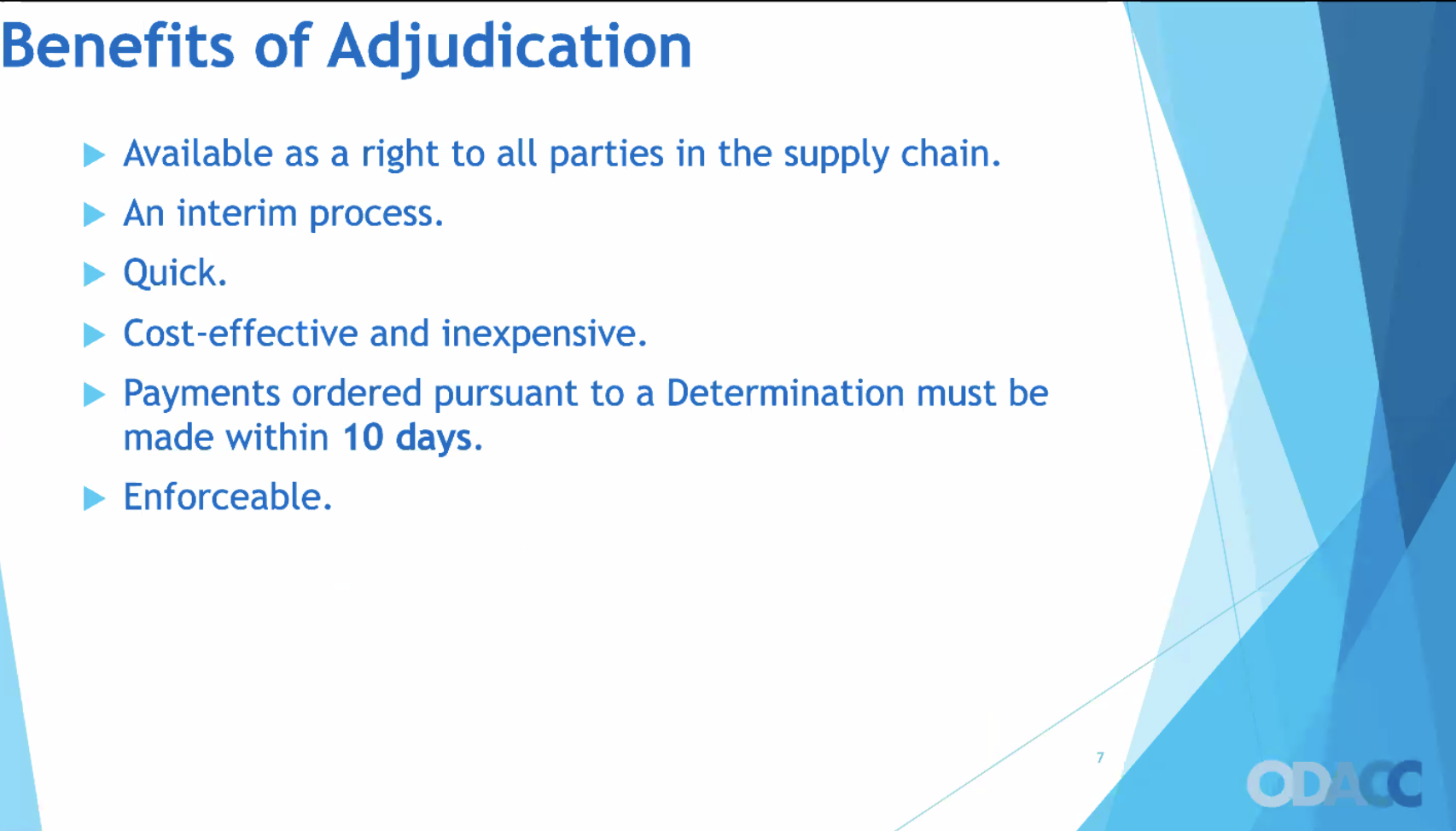 Is there a risk of “ambushing” at a time when you know the other side will have challenges in responding – say filing for adjudication at 5 p.m. on Dec. 24? And what about vexatious or unwarranted claims?

Ainley said that in the United Kingdom, from where many of Ontario’s adjudication provisions are modelled, these issues were more common when the adjudication system was first introduced but they died down after about five years when the parties discovered there was no advantage in playing unfairly. Adjudicators can award as much as 100 per cent of the other party’s costs if they determine that a party to the adjudication is acting frivolously, in a vexatious manner, with an abuse of process or in bad faith.

However, in most cases, the system is working the way it should. “Parties are leaving the adjudications happy with the effectiveness of its cost and timing,” Teitler said. “And people are living with the decisions.”