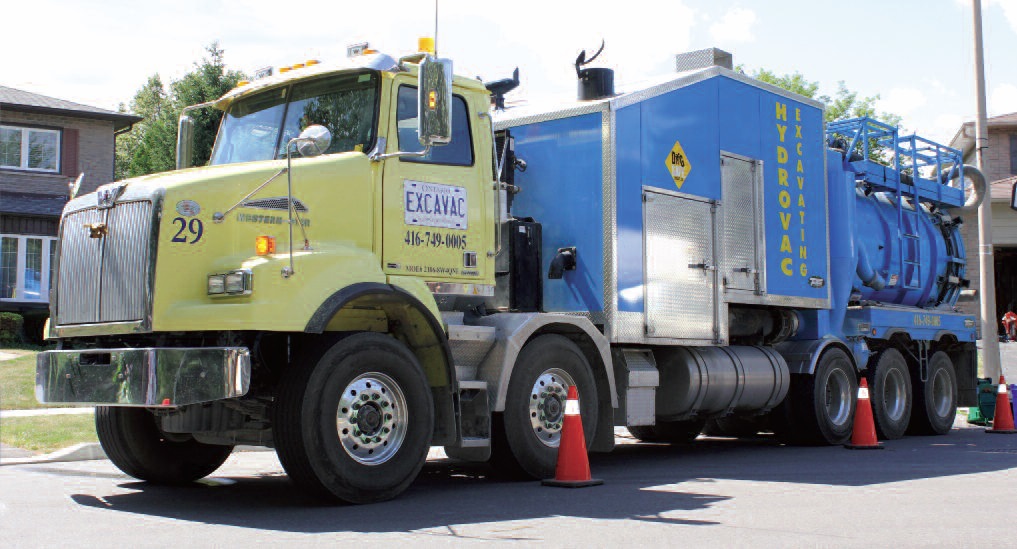 Mississauga based Ontario Excavac Inc. was founded in 1996 as a hydro-excavation service. Over its almost 20-year history, the company has grown through increased awareness of the practice and its application, and through a commitment to customer service and emergency response that has earned the company a solid reputation in the industry.

The company has grown, from its five original staff to a core of 78 employees and a fleet of 30 hydro vac vehicles. “We started with projects such as municipal water and curb stop repairs. As the industry has become more aware and our reputation has grown, we’ve taken on more and varied projects,” says Excavac strategic account manager Malcolm Robertson.

The process involves liquefying soil through the application of pressurized water and then vacuuming up the material. Because no cutting or digging is involved then, the procedure provides an added element of safety around utilities because there is no danger supply lines will be damaged. “We work with hydro electric, natural gas, water departments, and around sensitive fibre optics.”

Robertson says the procedure can also be less invasive than other methods because repairs can be achieved using keyhole technology from above, rather than a complete and messy traditional excavation.

As well, “for a utility dig, the excavator is usually provided with a ‘within one meter’ marker for the location of the utility. We can go in and use daylighting (a process of exposing the underground utility to daylighting through the keyhole method) to show exactly where the underground elements lay.” This then means the excavation can proceed more efficiently because there is confidence in where they are working.

He says hydro-excavation also makes sense where sites are constrained or access is limited. The process requires nothing more than room for one person, a six-inch vacuum tube and a water line. “In dense urban areas or where there is a desire not to disrupt adjacent properties, hydro-excavation provides a better alternative.”

Robertson says Excavac has become known for its emergency response times. “We use GPS tracking to know where our units are so we can react quickly and effectively and we have a 24/7/365 on call service so no matter when someone calls, they get to speak with a real person right away.”

HR – health and safety manager Lori Robinson says the company is also known for its reputation as an employer. She says any time there is a requirement to hire, a simple internal posting results in a flood of qualified applicants who have heard from people already employed there.

“We started out small and despite our growth have maintained a culture in which people matter. That, combined with our flexibility to respond, our commitment to a job well done has made us a success both in the industry and to the people we employ,” she said.