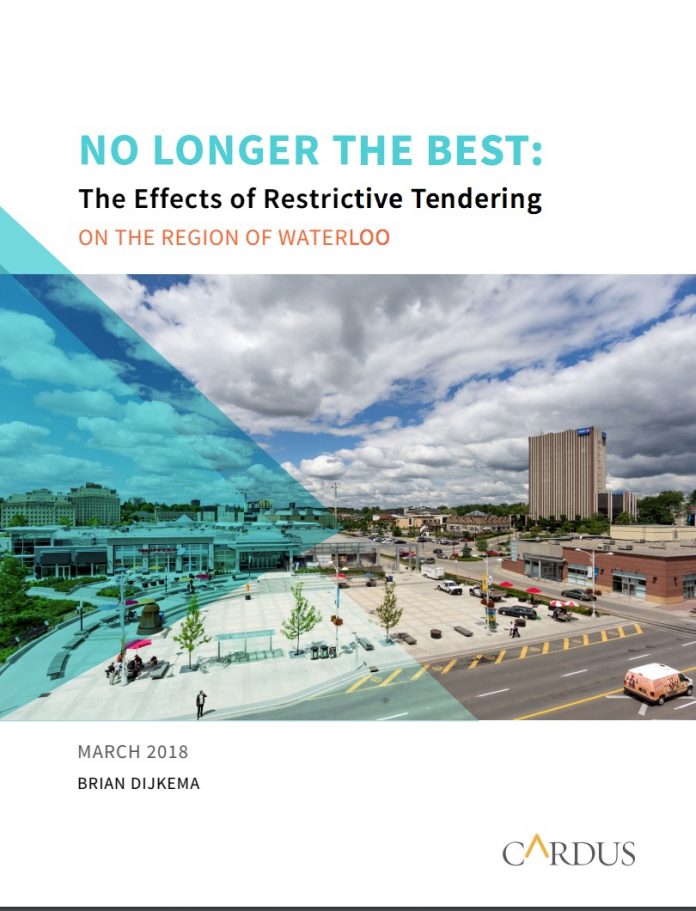 A Hamilton-based think tank that says it is “dedicated to the renewal of North American social architecture” based on “more than 2000 years of Christian social thought” has published a report asserting a Western Ontario regional government’s construction contracting policy is “unfair, uneconomic and uncompetitive.”

The report by Cardus’s Brian Dijkema says that the Region of Waterloo’s mandatory certification of the Carpenters’ Union under the Ontario Labor Relations Act “leaves taxpayers and most of the local construction industry out in the cold.”

The report asserts that the July 2014 decision to restrict construction contract bids exclusively to firms affiliated with the union had “several negative effects” including:

“The Region of Waterloo has created a coercive oligopoly that disproportionately benefits a small group of construction firms, which are able to increase their profits at taxpayers’ expense,” Dijkema, work and economics director at Cardus, said in a statement. “This uncompetitive policy bars someone from working on a public project because of a private choice they’ve made not to be affiliated with a particular, favoured union. This is unfair, uneconomic and uncompetitive.”

The Carpenters’ Union exploited a provision of the Ontario Labour Relations Act, which deems that certification is mandatory if the majority of workers on a given day sign cards. In this case, two workers, working on a Saturday, were able to fundamentally change all of the construction and procurement rules for the entire region, without a single resident or councillor getting a vote, the union’s opponents assert.

Cardus reported on this matter initially in 2015, with apparent support from the Christian Labour Association of Canada (CLAC), which, along with the Progressive Contractors Alliance and Merit Ontario, advocates for companies and workers not associated with the mainstream Ontario construction unions.

Cardus says it used its own funds to conduct the recently published research, though it acknowledged it has received support from CLAC and PAC among other organizations.

“Cardus does not do directed work,” Cardus executive vice-president Ray Pennings said in a statement.

“We create our own research ideas and do not take direction from any funders,” he said, acknowledging that in the past, “we have received funding and support” from various Chambers of Commerce, the PCA, CLAC, the Building Trades, Buildforce, and Employment and Social Development Canada. “At various times, these organizations have agreed to put their logos on our work as sponsors.”

“However, our report on Region of Waterloo closed tendering was not sponsored,” he said. “We do not publicly share the specific names and amounts of our donors. Audited financial reports are on our website and as a registered charity, we file the required documents with CRA. Regardless of who would benefit from open tendering, Cardus is concerned above all with the public good.”