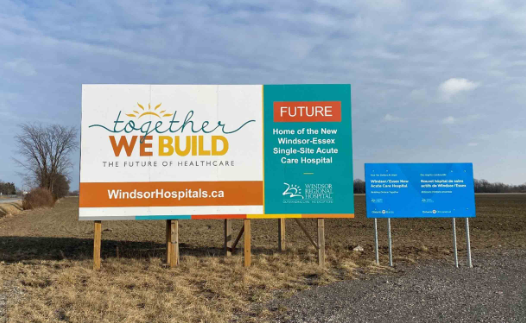 The construction timeline to build a new Windsor-Essex acute care hospital has been moved up about a year by the provincial government.

According to the November Market Update released by Infrastructure Ontario last week, the tender for the project will be issued between January and March 2025 with a contract to be awarded and construction to start in the summer of 2026.

The new construction schedule means the hospital could be completed by 2030, a year ahead of the original plan.

The estimated $2-billion “mega” hospital is to be built on County Road 42 at Concession 9, near Windsor International Airport.

In September, the hospital hired Stantec Architecture, a global design firm, as planning, design and conformance consultant for stage two of the project.

The company’s team of architects and engineers will work with dozens of user groups including community members to design the new hospital and final stage two plans are expected to reach the province by March 2023.

Hospital President and CEO Dave Musyj made the announcement at a media conference alongside Health Minister and Deputy Premier Sylvia Jones.

“I was asked by Premier Ford to deliver a very clear message to the people of Windsor-Essex, and that is we will not delay your acute care hospital,” Jones said. “We want to see this built and we want to see this project completed.

“We’re here, we’re a partner and we will make sure that this project gets to completion.”

The province announced $9.8 million in funding for Phase 2 of the project — the detailed planning stage — in October 2021. A crucial step in that phase was hiring a planning and design consultant.

Stantec recently worked on the new Cortellucci Vaughan Hospital and the Oakville Trafalgar Memorial Hospital, will complete block schematic drawings for the Windsor facility, showing how all rooms, departments and services can be organized.

Work on the Windsor project includes: