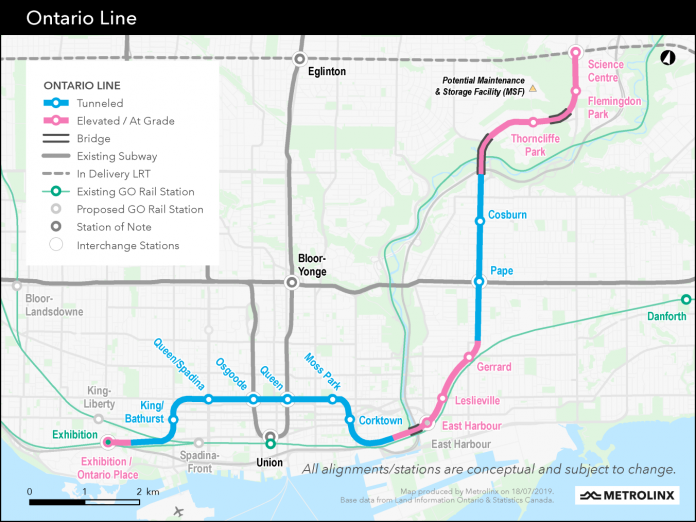 The Ontario government will soon begin the procurement process for the Ontario Line subway in Toronto, after announcing the project will be split into two segments.

Transportation Minister Caroline Mulroney says that the province will issue two Requests for Qualifications for the 15.5-kilometre line.

The Ontario Line, the signature project in the largest subway expansion in the province’s history. The government is issuing the first two public-private partnership (P3) Requests for Qualifications (RFQs) to identify and qualify those who will design, build and maintain the subway line. The Ontario Line is being built under three separate P3 contracts.

Originally scheduled for completion in 2027, Mulroney says COVID-19 has changed the plan.

“It’s still too early to tell what the exact timeline will be but there certainly has been an impact,” Mulroney said On the News Talk 1010 Jerry Agar Show.

According to bid documents posted online, the southern portion of the line will go to procurement first and will include about seven kilometres – six underground, seven of 15 planned stations slated for construction as part of the entire Ontario Line and terminate somewhere between Corktown – just west of the Don River.

“Investments in infrastructure projects, like the Ontario Line, will be essential for getting people back to work and improving the quality of life for people throughout the GTA,” said Kinga Surma, Associate Minister of Transportation (GTA). “To build projects of this magnitude, however, we need everyone at the table. We are calling on the federal government to commit to paying their fair share, at least 40 per cent of the four nationally-significant subway projects.”

Companies interested in bidding on the contracts must register with www.merx.com to download the respective RFQs. Infrastructure Ontario and Metrolinx will evaluate RFQ submissions and shortlist teams to be invited to respond to a Request for Proposals in fall 2020.

In addition to the three P3 contracts, some segments of the Ontario Line, where the alignment joins GO Transit rail corridors, will be procured separately. Work on these sections is expected to start before construction commences on the three major work packages.

“The Ontario Line is one of the most significant transit infrastructure projects for Ontario in a generation,” said Laurie Scott, Minister of Infrastructure. “Moving forward with these procurement contracts signals the government remains committed to building much needed transit infrastructure to reduce congestion and contribute to the economic recovery and renewal of our province.”

“To ensure that the bidding process, the procurement process, is as competitive as possible,” Mulroney said. “We want to attract people from around the world so that we can deliver what people in the GTA so desperately need which is a high quality transit system.”

The project has an estimated $11 billion price tag and is intended as a relief subway line running from Exhibition Place in the west to the Ontario Science Centre in the east through the downtown core.

Prior to COVID-19, Ford government officials said the line would be built by 2027, however, Mulroney now says the timeline might not be realistic.

The government does not make any reference to a completion date in its news releaseand Mulroney only told reporters the goal “is to get shovels in the ground as quickly as possible.”

No date has been announced for a construction start.

According to the news release, Infrastructure Ontario and Metrolinx will evaluate all submissions and “shortlist” teams to be invited to respond to a formal Request for Proposals in the fall.

A total of three contracts will ultimately be awarded as part of the construction of the line, though it notes that some segments “where the alignment joins GO Transit rail corridors, will be procured separately.”

Toronto will fund about 27 per cent of the total capital cost of the Ontario Line. The Ontario government, however, says the federal government will have to provide a portion of the cost to make the project a reality.