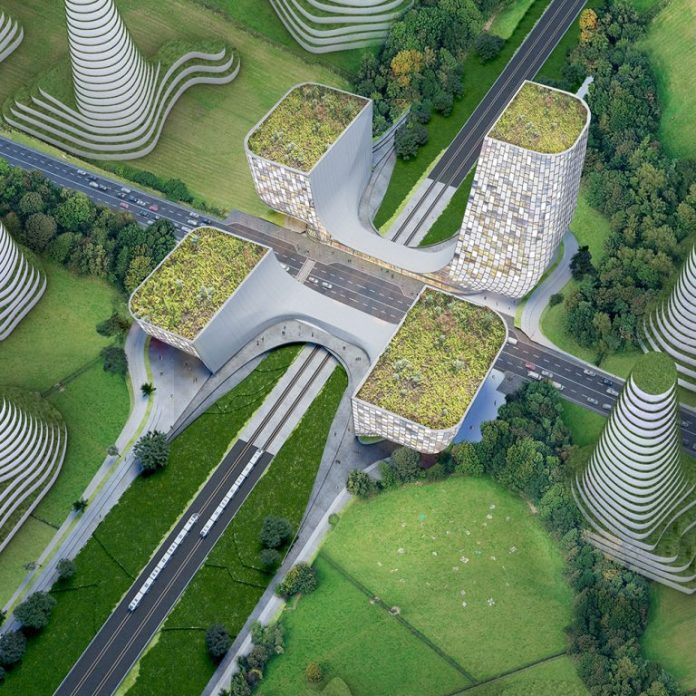 The Town of Innisfil in Simcoe County is planning to grow up. Way up.

Councillors got their first look last week at an ambitious and out-of-the-ordinary plan that will transition Barrie’s southern neighbour from a quiet, laid-back rural community into a more urban, modern and robust destination.

The Mobility Orbit plan is being called one of the most important projects ever undertaken in Innisfil. It includes a futuristic GO Train station surrounded by development. The design abandons traditional grid or square communities in favour of concentric circles of growth – inspired by old European city layouts such as Paris, Garden City and Europa City.

Innisfil partnered with Toronto-based architecture studio Partisans to help launch the idea. The station will be located the 6th Line east of the 20th Sideroad

“This is one of the most interesting and whimsical projects I have ever worked on,” said Alex Josephson, co-founder and architect at Partisans. “It’s a new way of thinking for city building.”

Tim Cane, manager of land-use planning for Innisfil, said the catalyst that launched the Orbit vision was the province’s decision to pull funding from the GO Station – meaning it must be funded by third-party investors and the municipality instead of MetroLinx.

“We have a great opportunity for a GO station, strong partnerships in the community and a blank canvas to create a brand new, forward-thinking community,” Cane said. “This is rural reimagined.”

There is nothing rural or familiar-looking about the development; from the futuristic train station built atop commercial and/or residential units, to the density that could rival developments in the GTA. The area will contain mixed-use developments with densities in excess of 150 people and jobs per hectare.

It’s presented as a vision for a complete, cutting edge community.

“We envision a community where our small town and rural lifestyles are enhanced by the benefits of urban living. Perhaps most important of all, the Orbit allows Innisfil to expand while we preserve our natural and agricultural lands,” Cane said.

“A train station doesn’t need to be a drab slab of concrete in the middle of nowhere,” Josephson said during his presentation to Innisfil Council. “You are about to set the way for Ontario.”

Instead of a run-of-the-mill GO station that is abandoned after rush hours, Innisfil’s wants to create a transit hub – not a “cookie-cutter shelter with a parking lot.”

Councillors were obviously excited by the potential of the Mobility Orbit vision and Mayor Lynn Dollin said, “It’s the way growth should have been done years ago.”

They unanimously endorsed the vision, along with an agreement between the town and Vaughan-based developer Cortel Group – a major landowner within the Mobility Orbit radius.

Cortel Group is committed to providing the total cost of the land, design and construction of the GO station, and agrees to revise phases 4 and 5 of the Sleeping Lion subdivision plan to come in line with the Mobility Orbit vision, among other things.

In exchange, the town will work to secure funding from the County of Simcoe for the train station in the next county development charges study and provide development-charge (DC) credits to Cortel. The town has also agreed to do the same in its own DC background study.

While they are confident that the rural lifestyle and open green spaces that draws people to the town will be preserved, the new community will be a melting pot “of all the things happening globally,” said Tim Cane. There’s even a “smart mile” incorporated into the development.

Depending on funding commitments from the provincial government for the 6th Line interchange, Cortel Group has also committed to front-end financing of one-third of the cost for the interchange, in exchange for DC credits.

Phase 1 of the orbit vision focuses on completion of the station and a Sleeping Lion build-out within the first 400-metre radius with a population target of 5,000.

Over decades, the orbit’s full population target within the 800-metre radius is 150,000 people.

Planners hope to have the GO station completed by Sept. 2022, at an estimated cost of $20 million.