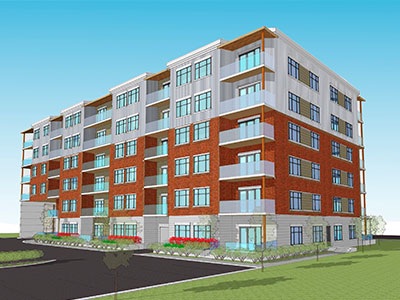 Despite last January’s  building code changes allowing developers to construct an extra two stories on wooden structures — bringing them to a maximum of six floors — there hasn’t been a surge of building permit applications for the larger wood structures, according to the Canadian Wood Council.

The code changes are similar to ones made earlier in British Columbia.  They come with requirements for non-combustible materials in areas like stairwells, and more stringent safety requirements.

“It’s not just a question of the code changing,” Street said. “There’s a lot of information which architects and engineers have to process in coming up with the right materials and structural solutions to make it happen.”

Street estimated to the business publication that about a half-dozen projects are close to permitting at the muncipal level. Most are happening in the GTA, Cambridge, Hamilton and  Kitchener-Waterloo, where they are a viable option to build sustainable, affordable structures in high-density areas. The WoodWORKS advisor estimates there will be greater activity next spring.

No exact figures are available on the number of wood mid-rises nearing the construction phase across the province, but Street estimates about a half-dozen projects are close to the permitting stage at the municipal level.

Of the developments that are close to the construction, most are taking place in the Greater Toronto Area, Kitchener-Waterloo, Cambridge and Hamilton where planners have embraced wood buildings as a viable option to build sustainable and affordable housing to fill space in high-density areas.

Street, who has spoken at mid-rise seminars across Ontario, said the design community is excited about the code changes and he anticipates greater activity by next spring.

Mike Baldinelli, a structural engineer and a principal at Strik Baldinelli Moniz in London, ON., told Northern Ontario Business that he has encountered trepidation among clients in going to six stories.

“What I’m finding – and it’s tough – a lot of people are scared to build out of wood because they’ve never built out of wood. People are hesitant to take that leap because they just don’t know.”

He said the hesitancy has nothing to do with fire safety concerns, but clients’ overall comfort level, and questions surrounding sound issues, durability and salability.

“They don’t want to be the guinea pig. They just aren’t confident enough, thinking they could have a concrete building for the same price.

“Developers are hesitant to say a building is made out of wood. People think it’s cheap.”

However, he says there are indeed real savings with wood construction, which is lighter and faster to erect, resulting in savings of 10 to 12 per cent per square foot.