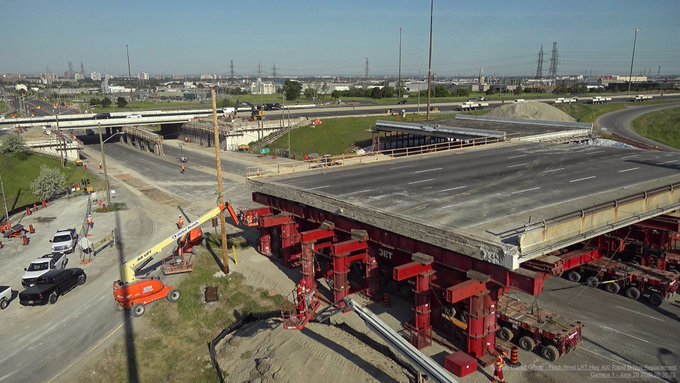 During this past weekend construction crews replaced the southbound lanes and next weekend they will do the northbound lanes.

Thanks to an engineering process that dramatically speeds up the replacement, the disruptions will be kept to a minimum. Here’s how the first weekend was constructed on social media.

Metrolinx continuously updated the bridgework project on Twitter and answered viewers questions throughout the project.

@MosaicTransit worked around the clock to excavate and cut away the existing Hwy. 400 southbound bridge and then lift and remove it to a temporary site.

Each new bridge span is 40-metres long, uses 60 prefabricated girders and weighs 1,500 tonnes and when they are combined they’re as heavy as about 450 elephants. They are six lanes wide in each direction

The same process was used to replace the northbound side of the bridge this past weekend.

Metrolinx officials estimated that the bridge deck had about 10 years of life left and the new structure will last 75 years. The LRT, which is expected to be completed in 2023, is set to run from Finch West Station to Humber College.

Construction methods enabled crews to complete the project in a matter of days when it would normally have taken years.

Using a ‘rapid bridge replacement’ (RBR) method, constructor Mosaic Transit Group has already done a significant amount of work to prepare for the job. In February, Mosaic received and placed the large reinforced concrete girders to build the framework for the bridge decks. The girders were then hoisted in place on scaffolding that has been set up beside Highway 400.

The real – and literal – heavy lifting happened over two weekends in June, where these bridge decks will be moved into place on Highway 400 to form the new bridge spans. During the first weekend, Mosaic will work 24 hours to lift the existing southbound bridge and replace it with the pre-constructed bridge deck.

The decision to speed up the project allowed the project to be completed during the COVID-19 crisis with minimum disruption. When complete, the LRT is expected to take buses and cars off the road and improve connections in north Toronto.

To see more photos of the two weekends of work, visit @FinchWestLRT on Twitter.