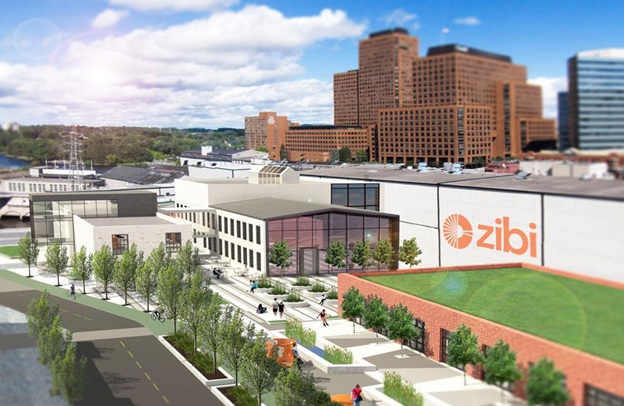 Zibi is a $1.5 billion redevelopment project by Dream Unlimited Corp. and Theia Partners in downtown Ottawa and Gatineau.

The new mixed-use community, located on both the Ottawa and Gatineau shores of the Ottawa River, will transform former industrial lands into a blend of mid-rise residential housing types, commercial and office spaces, waterfront plazas, outdoor squares, and diverse retail offerings.

Two months ago, Zibi announced that construction crews started work to build one of Canada’s greatest and most sustainable urban communities. The construction crews are demolishing one of downtown Hull’s largest industrial buildings.

With approximately $100 million in infrastructure alone, Zibi will provide servicing for close to 5,000 residents and enough office space and retail for more than 6,000 people. Demolition and revitalization activities are currently underway, paving the way for the completion of Zibi’s first Gatineau condominiums “O” and the start of construction on Ottawa’s first residential offering “Kanaal,” as well as the first publics spaces Zibi Plaza and Head Street Square.

Original members of the Zibi team, including President Jeff Westeinde, recently announced a new venture: Theia Partners, which has evolved out of Windmill Developments. The new development agency will make Zibi its primary focus.