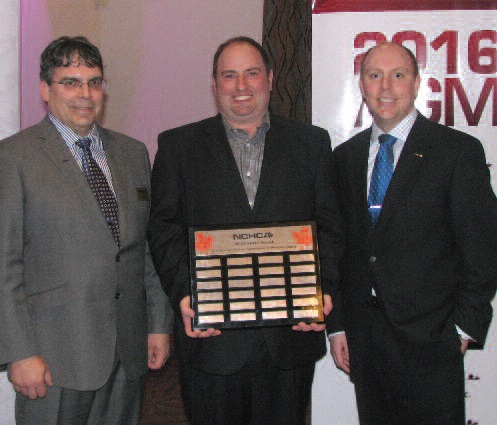 The National Capital Heavy Construction Association (NCHCA)’s 2016-17 president says the association has set a priority to work with the City of Ottawa to receive “its fair share of federal and provincial infrastructure stimulus funding, particularly for renewal projects.” As well, Kevin McIntyre said in his initial speech at the association’s annual general meeting in April that the NCHCA wishes to ensure that the city’s Vendor Performance Management (VPM) system “is fairly and effectively designed and implemented.”

McIntyre, who took the leadership reigns from Perry Crozier at the Centurion Centre gathering, said the NCHCA has grown to almost 250 members representing more than 10,000 workers since its establishment 38 years ago. “The primary focus of our efforts over the past few years has been on promoting infrastructure investments in roads, bridges and sewer and watermain systems to municipal, provincial and federal governments,” he said.

He said the association:

He said the association plans a “steady course” in its objectives and strategies over the next year. With regards to infrastructure investment, “we have already launched our lobbying efforts with provincial and federal members of parliament.”

“We stand ready to work co-operatively with the city to ensure there are competitive tenders on shovel-ready capital projects related to roads, bridges, water and sewer projects, and that these projects are completed on time and within budget.”

McIntyre said the NCHCA has worked closely with the city to provide input into the VPM’s initial design “and will continue to provide insight into the design and implementation of the scoring system.” The NCHCA has established a committee, under Wade Cloutier’s leadership, to co-ordinate the association’s position and feedback, he said.

McIntyre said the NCHCA has also taken measures to combat construction site crime, by partnering with Crime Stoppers to provide as much as $5,000 in reward money “for tips related to successful recovery of members’ stolen construction equipment over the next year.”