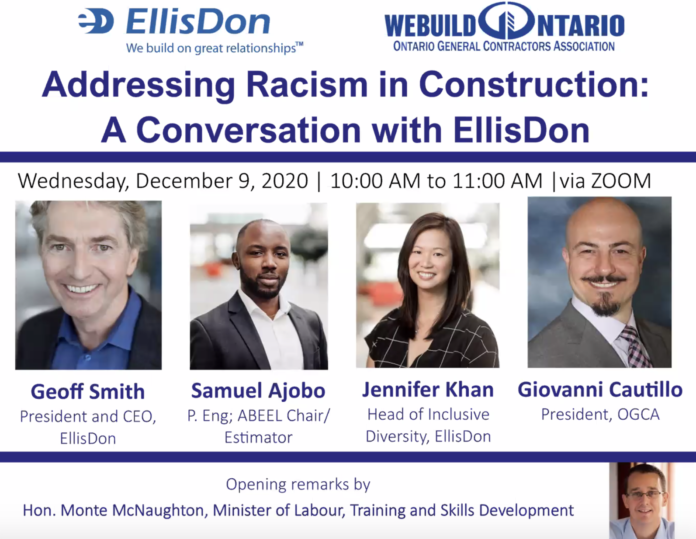 Three of the contractor’s leaders, including Geoff Smith, president and CEO, spoke about “addressing racism in construction” in December at a ZOOM panel discussion co-ordinated by the Ontario General Contractors’ Association (OGCA). OGCA president Giovanni Cautillo said more than 350 attended the virtual event.

The discussion took place just a few days after Toronto police arrested a 34-year-old man and charged him with “hate motivated mischief and criminal harassment” following an investigation after racist nooses were discovered at the Micheal Goren Hospital construction site on June 10.

Smith and Jennifer Khan, EllisDon’s head of inclusive diversity, said the contractor wasted no time after the incident – targeted at two Black construction employees – in making the matter public. Managers called police and brought workers on the site together for an urgent meeting to make it clear that racism will not be tolerated.

Smith said he was surprised when he first learned about the nooses. “I was frankly astonished that this could occur in this industry,” he said. “I have never heard of such as thing.”

However, Smith said EllisDon estimator and engineer Samuel Ajobo, who is Black, quickly let him know that the problem is real and deep. “I was quickly educated by a few people, including Samuel . . . and one of the two victims on the site who made it clear to me that we have a real problem in this industry.”

“I would just encourage everybody in the industry that acknowledging racism doesn’t mean you are a racist,” Smith said. “It means you’re acknowledging that there is a problem.”

Khan and Ajobo made it clear that one problem within the industry is that Blacks, women and minority groups are not well represented. Most CEOs and high-level executives are white men. Since people are often most comfortable working with people they know well, this means that underlying racism problems often don’t get noticed properly.

Thus, the solutions must go beyond immediate response to racist incidents – though these can set the stage for highlighting the problem and initiating initiatives to change conditions.

Khan said EllisDon wasted no time June 10 in providing emotional support to the affected workers, while police were called. “Within hours we had a site stand-down,” she said, “to educate and make everybody aware of what happened . . . what was found, where it was found, and what are the steps that we are going to take.”

Ongoing, she said the company has set up an anonymous reporting email and phone system for employees if they encounter “any form of racism of discrimination.” As well, the company is using the joint health and safety committees and worker trade committees on site to bring forward any concerns about discrimination and racism.

“We’ve enhanced a lot of our security or security features on our sites, as a way to deter (racism) and make sure that our sites are secure and safe to work, including the addition of security guards, cameras, shoring up our hoardings, and controlling or monitoring access to the site so we know who is there on a specific day.”

In a broader sense, she said the company has organized three working groups to explore the longer-range issues of systematic racism by improving access and opportunities for minorities.

EllisDon has introduced a mandatory employee program that looks “at how do we create an inclusive environment, what are the different perspectives that we’re bringing that come into play,” Khan said. “What are some of the nuances of languages and how that affects other people?”

Ajobo, who is also chair of EllisDon’s ABEEL group (The Alliance for the Black Employee Experience and Leadership), outlined an eight-point strategy to overcome racism.

“Their obligation to create and maintain a safe working environment is enshrined in law and the provincial Human Rights Code, and the Occupational Health and Safety Act.” Employers who don’t fulfill this obligation should expect a visit from a Labour Ministry inspector, he said.

Toronto jumping at an “unprecedented opportunity” to ramp up construction projects...